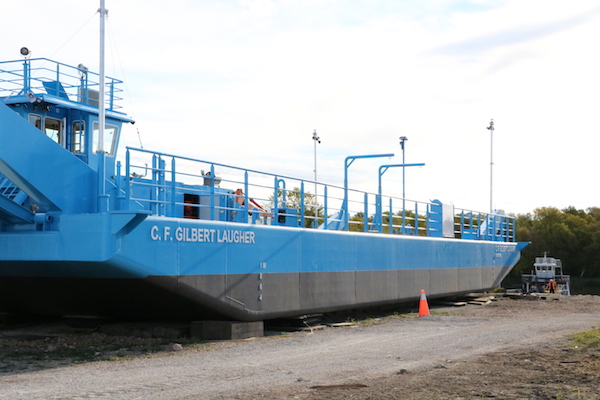 The C.F. Gilbert Laugher sits in a provincial yard in Selkirk, Manitoba on Friday, September 23, 2016. (LINDSEY ENNS / THE SELKIRK RECORD)

A new 156-tonne cable ferry is ready to hit the water to replace an aging vessel servicing the community and area of Norway House First Nation.

Crews in Selkirk, Manitoba have been busy preparing the Gilbert Laugher for her maiden voyage. The vessel’s namesake comes from honouring Gilbert Sandy Laugher, who was born in Norway House in 1928. He worked as a respected, long-service government ferry operator until he retired in late 1993. Gilbert passed away in 2008.

Additional testing on the $3.1 million ferry will be carried ou this winter before it rolls out in the spring of 2017. The province says it will move to the north end of Lake Winnipeg and portage overland to avoid the rapids at Sea Falls along the Nelson River at PR 373.

It takes a 96-tire transport platform to move the ferry with pilot vehicles over a 16-kilometre route to Selkirk’s riverside location.

The new ferry replaces the aging C.F. James Apetagon, which has been in service since 1977. The Apetagon will see limited use at another undetermined location.

The ferry will begin launching at 10 a.m. today and is expected to reach the water’s edge by 3 p.m.