Home » News » Roll Up and Get the Shot: Flu Clinics Opening Province-Wide

Roll Up and Get the Shot: Flu Clinics Opening Province-Wide 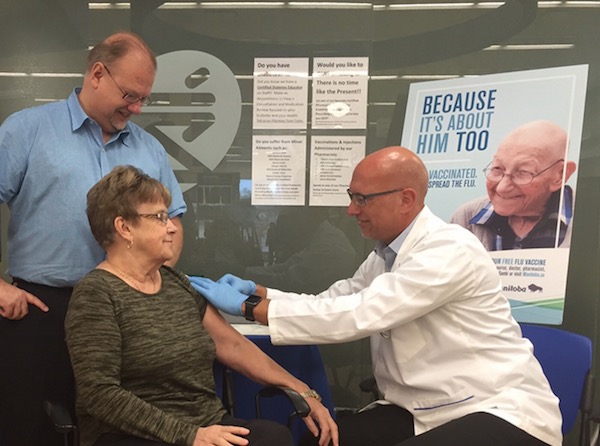 Health Minister Kelvin Goertzen and his mother, Anne Wiens, get their flu shots in Steinbach on Friday, September 30, 2016. (GOV.MB.CA)

WINNIPEG — Free influenza vaccine clinics will begin sprouting up across Manitoba as flu season rolls around.

The province is encouraging all Manitobans to get the shot to protect against illness.

“Getting immunized protects the person who received the vaccine but it is also key in the prevention of serious illnesses for those unable to receive the influenza vaccine, like newborns,” said Health Minister Kelvin Goertzen while getting the flu shot in Steinbach on Friday.

Those most at risk of catching the flu include:

Manitobans over the age of 65 should also get a pneumococcal vaccine at the same time as the seasonal flu vaccine.

To get a flu vaccine and pneumococcal vaccine, contact a doctor’s office, local public health office, nursing station, pharmacy, QuickCare Clinic or ACCESS Centre. Those living in the Winnipeg health region can visit a WRHA flu shot clinic between October 25 and 27.