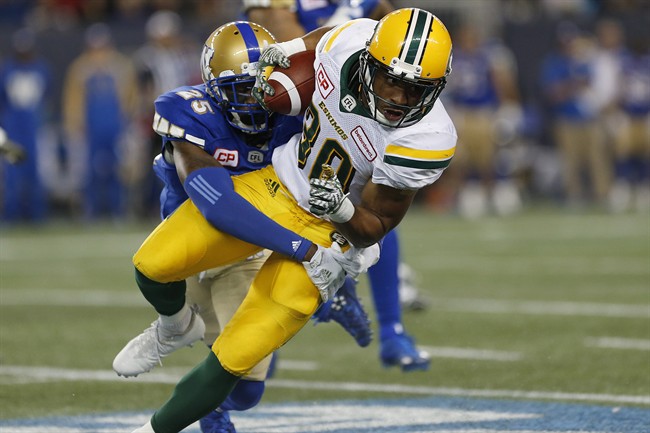 Edmonton Eskimos’ John White (30) gets wrapped up by Winnipeg Blue Bombers’ Bruce Johnson (25) during the first half of CFL action in Winnipeg Friday, September 30, 2016. (THE CANADIAN PRESS/John Woods)

WINNIPEG — For the Winnipeg Blue Bombers players and coaches, it was a week of talking up a 60-minute effort, trying to diagnose a shootout loss to Calgary that ended their seven-game win streak. The resulting game? It can only be referred to as déjà vu.

Faced with the Edmonton Eskimos on Friday, the Bombers defence struggled to slow quarterback Mike Reilly in the first half. The slow start hurt Winnipeg again, as their offence waited too long to liven up, and the 24-10 halftime hole ended up being too big to dig out of. The Eskimos would win in the end, 40-26.

Reilly was expert in building the Eskimos lead, recalling his performance at Investors Group Field earlier in the season, throwing for 355 yards and two touchdowns on 32-for-38 passing (83 per cent). He spread the ball to six receivers, most notably Dorel Walker, who nabbed eight catches for 120 yards and a touchdown. Adarius Bowman, another wideout threat, had the other receiving score for Edmonton.

On the Manitoba side, quarterback Matt Nichols had a pair of brilliant touchdown tosses, but was mostly unable to create a methodical offence. Edmonton had the lion share of possession time in the first half – 18 minutes to 11 – and the Winnipeg defence promptly faltered.

“We came out with some fire, but we weren’t consistent enough and we weren’t playing our type of football,” said defensive back Chris Randle.

The Bombers were also hurt by sloppy play, rolling over 100 penalty yards for just the fourth time this season. Highlighting this was (yet another) Kevin Fogg kick return touchdown called back by a blocking penalty, a play that could’ve swung momentum in the Bombers favour. For Fogg, that makes an astounding four return touchdowns he’s had called back on penalty this season.

“We can’t keep doing that,” said Fogg. “We can’t always depend on ourselves to come back, and we just have to continue to try to come out fast.”

“This time of year, it’s tough to win with that many penalties. That’s the big one,” said Bombers coach Mike O’Shea. “Teams are starting to play cleaner football, and this game wasn’t for us.”

The loss is Winnipeg’s second straight, as they fall to 8-6, while Edmonton improves to 7-7 and stand well within striking distance of a crossover playoff spot.

The Bombers were hopeful that this weekend could secure that spot for them, needing a win and an Argonauts loss. That will have to wait though, with four games left to finish the job.

Those games come in the form of two home-and-home’s, against B.C. and then Ottawa. It begins next Saturday at Investors Group Field against the Lions.

“The sky’s not falling, we lost to a good football team that outplayed us tonight,” said Nichols. “Now we get ready for a good B.C. team and a team that’s barely ahead of us in the standings, so these next two games will be big for our season and that’s what we’re focused on.”