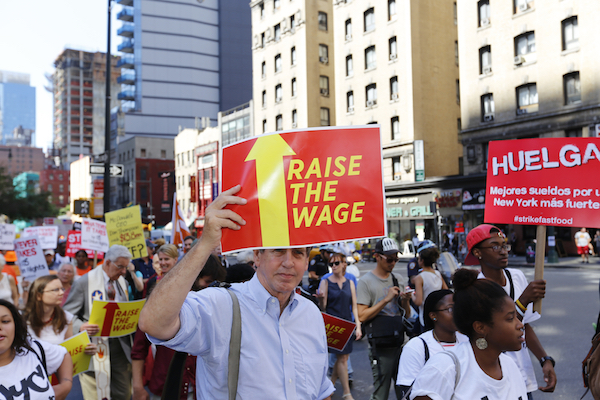 NEEPAWA, Man. — In the United States, there’s a powerful debate raging over minimum wage. Across the country, low-wage workers are protesting, demanding the minimum wage be increased to $15/hour. Currently, for states that have a minimum wage, the rates are between $5.15 and $10.50 an hour. We are seeing the same debate in Canada, although not to the same extent.

It’s not hard to see their motivation, the U.S. economy has seen recessions and a decline in well-paying middle-class jobs. We’re seeing more inequality and increasingly, we are seeing college and university-educated employees working at low-paying retail and service jobs, without a clear path towards the prosperity they so badly want. This might not be a problem if it weren’t set against the backdrop of large corporate profits.

According to Forbes, the 10 most profitable companies in the U.S. made $210 billion in 2015 alone. Included in that top 10, among Apple and oil and gas giant Exxon Mobil, is minimum-wage employer Walmart. It’s hard when you struggle to put food on the table and gas in your car to see your employer post a $19.2 billion profit. To their credit, Walmart has moved to offer better compensation, now paying at least $2.75 over minimum wage. While Walmart is the largest, the Forbes top 500 list is full of employers whose staff aren’t making much over minimum wage. It’s hard not to feel for the little guy.

The problem is that while these large businesses do employ a lot of people, the majority of businesses are in fact small. In the U.S., the Small Business Administration says that 99.7 percent of the country’s businesses are small and in Canada, the statistics are the same. While Walmart, or The Home Depot, or McDonald’s may be among the most profitable companies in the U.S., that’s not the case for most of the smaller businesses paying minimum wage.

The challenges facing low-income workers are real and should be addressed, but a higher minimum wage isn’t the answer. No matter how much proponents say it won’t happen, a rise in the minimum wage can only mean one of two things: a rise in prices for all goods, including the necessities purchased by minimum wage earners, or a decrease in the number of jobs. The decrease in jobs can happen in one of two ways; first, some employees will be let go and the work will be spread among the remaining staff; second, human jobs will be replaced by automation and self-serve, something we are already seeing at retailers and fast food restaurants.

The statistics back this up. In 2008, an extensive study of decades worth of minimum wage research found a one to two percent decrease in employment for teenagers or very low skilled workers for each 10 percent increase in minimum wage. The nonpartisan Congressional Budget Office did their own calculation and found that an increase in the federal minimum wage, from its current rate of $7.25 an hour to $10.10 an hour, would result in the loss of about 500,000 jobs. The same trends are true in Canada as well.

Perhaps we could justify the job losses for these workers if overall, low-wage earners would be helped from poverty, but the statistics show that the relationship between minimum wages and poverty is actually quite weak. Work done by researchers at the Federal Reserve Bank of Cleveland found that higher minimum wages can actually increase poverty. In March 2016, Statistics Canada released their own report about minimum wage in Canada and the report noted that there is no consensus about how the minimum wage affects poverty and inequality, but added that the association with employment is well-documented — an increase in the minimum wage seems to be associated with a decrease in employment among teenagers, the group most likely to be paid at this hourly rate.

The issue of poverty reduction and the ability of working people to earn a living wage are extremely important to our society, but an across the board raise in minimum wage isn’t the answer. Fewer jobs and further erosion in purchasing power isn’t the answer. Despite this, it’s clear that governments like these policies, they shift the responsibility to private entities and while some of them can absorb the costs, many of them aren’t so fortunate.