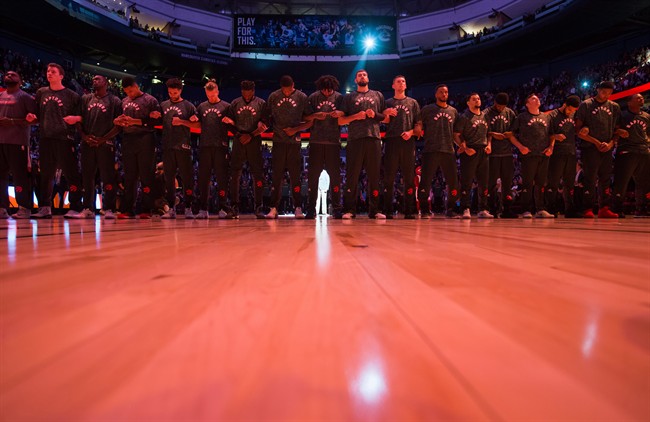 Toronto Raptors players lock arms during the singing of the national anthems before a pre-season NBA basketball game against the Golden State Warriors in Vancouver, B.C., on Saturday October 1, 2016. (THE CANADIAN PRESS/Darryl Dyck)

VANCOUVER – True to their word, the Toronto Raptors took a stand on Saturday by locking arms during the national anthems prior to a pre-season game against the Golden State Warriors.

Players and staff stood arm in arm during both the “Star-Spangled Banner” and “O Canada” at Rogers Arena, with some bowing their heads.

The Raptors said earlier this week that they planned to join the growing chorus of professional athletes speaking out against police brutality and racial injustice in the United States.

“We wanted to show solidarity,” said Raptors guard Kyle Lowry. “We’re a team, we’re all together, we’re all one race, we’re all human beings. We all understand that things in the United States and the things in the world (aren’t) the best right now.”

San Francisco 49ers backup quarterback Colin Kaepernick has refused to stand for the U.S. anthem, a protest that has spread across the NFL.

The NBA has a rule that players and coaches must stand during the anthems, although it wasn’t mentioned in a recent letter to the players.

Players and staff from Golden State stood at the opposite end of the floor during the anthems, but didn’t take part in any type of protest.

The Raptors, who won the game 97-93, held discussions as a team all week in Vancouver before the decision was made to link arms.

Raptors guard DeMar DeRozan said they were in a unique position because the team is based in Canada and its roster has a number of international players.

“We have guys who are not from America,” he said. “They go through their own problems in their own country, or whatever the case may be.

“If we can help in any type of way in a positive way, help a kid have a different outlook on something or have the right approach to something in life, that’s beneficial.”

DeRozan added that it didn’t take long for the team to come to a consensus.