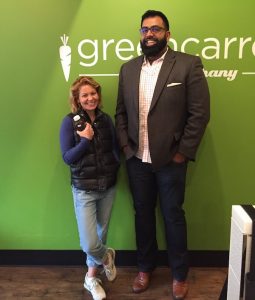 You may just bump into actor Candace Cameron Bure on the streets of Winnipeg these days.

The “Fuller House” star is in the city filming an upcoming Hallmark Hall of Fame movie called “Back to Christmas.”

Bure posted to her Instagram on Wednesday evening while having dinner with longtime friends in the city. On Thursday, she popped into Green Carrot Juice Company in Osborne Village and posed for a photo with owner Obby Khan.

Bure began shooting in Winnipeg on September 23 and will wrap on October 15. Production is mainly centred around the Wolseley area, but other locations include a theatre, police station, bandstand, and a hospital.

Season two of “Fuller House” — a modernized version of the popular “Full House” TV sitcom of the 90s — is available December 9 on Netflix.