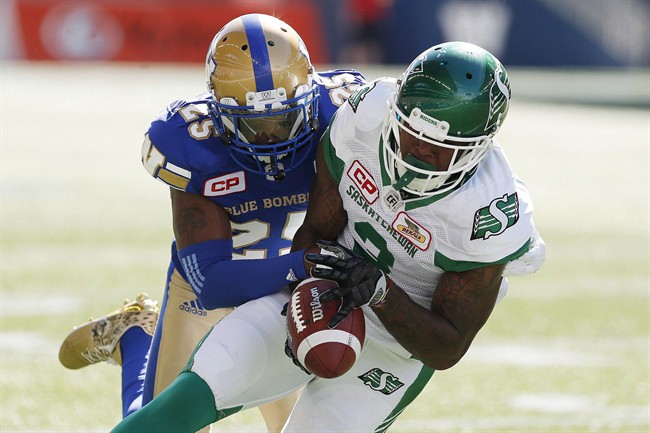 Winnipeg Blue Bombers’ Bruce Johnson (25) strips the ball from the hands of Saskatchewan Roughriders’ Ricky Collins Jr. (3) during first half CFL Banjo Bowl action, in Winnipeg on September 10, 2016. Winnipeg Blue Bombers defensive back Bruce Johnson has been suspended for two games due to an anti-doping violation. Johnson tested positive for the banned stimulant Methylenedioxyamphetamine. (THE CANADIAN PRESS/John Woods)

Winnipeg Blue Bombers’ defensive back Bruce Johnson has been suspended by the CFL for testing positive for methylenedioxyamphetamine (MDA).

A first-time doping violation will have Johnson sitting out two games effectively immediately.

Under league rules, a second violation will result in a nine-game suspension, a one-year suspension for a third violation and a lifetime ban for a fourth violation.

“I take full responsibility for my decisions and accept the disciplinary action,” Johnson said in a statement.

“I apologize to my coaches, teammates, the Winnipeg Blue Bombers organization and Bomber fans, and will use this as a learning opportunity for myself. I hope to return following my suspension and help our team continue the push toward the playoffs.”

Blue Bombers general manager Kyle Walters said: “We are disappointed with Bruce and his decision, but I trust no one is more upset in his actions than Bruce himself. The Winnipeg Blue Bombers fully support the policy on performance-enhancing drugs, and we trust Bruce will learn from his mistake moving forward.”