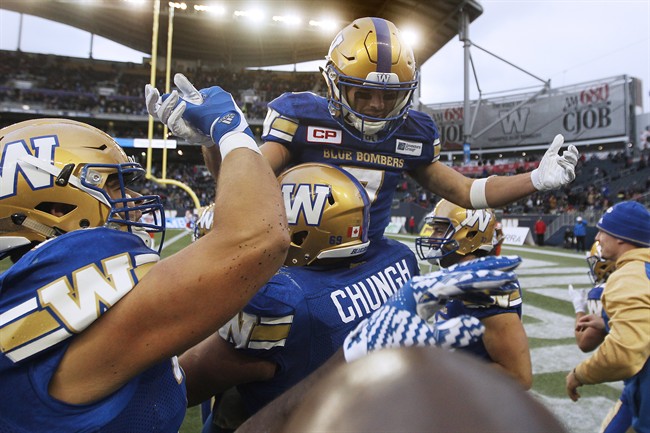 Winnipeg Blue Bombers players raise Weston Dressler (7) after he ran around the end zone burning off precious time in the dying seconds of the second half of CFL action against the B.C. Lions in Winnipeg Saturday, October 8, 2016. (THE CANADIAN PRESS/John Woods)

WINNIPEG — Early on, it all looked too easy for the Blue Bombers. The offence was ingenious, the defence was energized, and a 24-3 lead came as a result.

That all changed as the clouds moved in on Investors Group Field. Instead, the game lived up to its playoff implications, as the B.C. Lions stormed back with 17 unanswered points. The game then concluded with two teams going blow for blow, right up until the last minute, when a heroic goal line stand by the Bombers defence gave the game its final score: 37-35.

The Bombers’ win comes thanks to two stars, one on each side of the ball. On offence, it was running back Andrew Harris. Returning from injury and playing against his former team, Harris was dynamic in all the ways he can be for Winnipeg – he ran for 66 yards and received 50 more, finishing with 116 total yards and a touchdown.

Bombers’ offensive coordinator Paul LaPolice also took advantage of having a second running back at his disposal, running a few creative sets to flummox the B.C. defence. Late in the first, quarterback Matt Nichols faked an audible, setting up an end-around play that ended with Rory Kohlert tossing it to Nichols, open in the end zone, for the receiving touchdown. Nichols had 233 yards passing and two touchdowns to go with his atypical receiving score.

“As far as I can remember, that’s my first ever (touchdown) catch,” said Nichols, adding later, “Honestly, that was a big play for us and I think Rory has the highest QB rating in the league now.”

On the defensive side, the hero was linebacker Maurice Leggett. Leggett was key in the team’s hot start, nabbing his seventh interception of the season at the end of the first quarter, setting up a drive that gave Winnipeg a 21-3 lead. He would leave with a lower body injury in the third quarter, but returned to gut out the last B.C. drive of the fourth quarter. With the game on the line, he wrapped up Lions running back Chris Rainey at the Bombers two-yard line, forcing a turnover on downs.

“I was ruled out, and me being stubborn, I just did some agility testing on the sideline and felt ready to go,” said Leggett.

“It’s a testament to the kind of locker room we have,” said Jamaal Westerman. “He’s not going to go out there injured and not be able to make a play, but he wanted to go out there for us and be accountable for us. That’s just the type of guy he is.”

“Spinning off the block and throwing himself in the path of Rainey, stopping him short on third and short is an unbelievable football play. I’m so proud of him,” said O’Shea.

This barnburner had other big performances. The reliable receiver Weston Dressler grabbed five passes for 65 yards, while Clarence Denmark had the 23-yard winning touchdown at 7:50 in the fourth – his seventh of the year.

“[Clarence] is always in the right position and he’s always there to make the big play for you,” said Nichols. “I know in a one-on-one situation, I can get the ball out to him and he’s going to stride out and you can always count on him.”

On the Lions side, the Bombers were hard pressed to slow down receiver Bryan Burnham, who eclipsed 200 yards receiving on nine receptions. Quarterback Jonathan Jennings had a huge afternoon too, throwing for 422 yards, albeit with two picks in the process.

With the win, Winnipeg (9-6) is now just half a game back of B.C. (9-5) for second place in the West Division, with an opportunity to overtake them next Friday in Vancouver. The win also bolsters their lead over Edmonton (7-7) on a potential crossover spot, and can clinch that berth with Toronto and Montreal losses this weekend.

After finishing their home-and-home with the Lions, the Bombers will go on a bye week. After that, the regular season concludes with a home-and-home against the Redblacks.