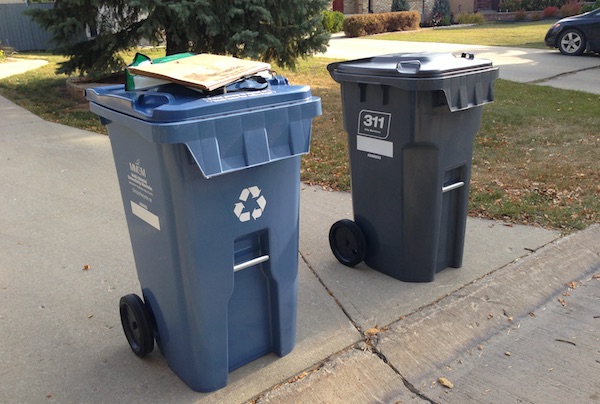 WINNIPEG — With the controversy swirling who should have been awarded a new garbage and recycling contract at City Hall, a new poll suggests most Winnipeg residents want city workers to do the dirty work.

CUPE Local 500 tapped Probe Research to dumpster dive and ask whether public employees should get the first crack at making the weekly pick-ups.

Emterra Environmental, who was awarded its last contract in 2012, was kicked to the curb this time around after a failed bid and slew of complaints early on. GFL Environmental and Miller Waste Systems Inc. are poised to be awarded contracts to split the work based on city quadrant outlines. GFL would handle collection in the southeast, while Miller Waste would have the northwest section.

The city is shelling out $24 million per year for the contracts, which are scheduled to begin October 1, 2017 and last until January 31, 2025

CUBE found that 59 percent of Winnipeggers believe the city should look into using their own workers and equipment, compared to 32 percent who did not agree with that approach.

Of those asked, 58 percent of respondents favoured using city employees compared to 32 percent for private companies.

The results were part of a series of questions asked for the Canadian Union of Public Employees in a September 13-26, 2016 Probe Research poll. The random polling sample of 600 Winnipeg adults is considered 95 percent accurate within +/- 4.0 percentage points compared to a sample size of the entire Winnipeg adult population.

“I have a duty not only to protect and promote good jobs, but also good value for Winnipeggers,” said Delbridge. “Other cities have saved money and improved services with City employees.”