Doug Brown Next Inductee to Bombers’ ‘Ring of Honour’ 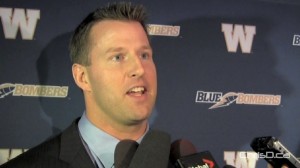 Doug Brown is the latest Winnipeg Blue Bomber alum to be inducted to the Ring of Honour next week.

Brown played 11 seasons with Winnipeg and was named a Divisional All-Star eight times and a CFL All-Star seven times.

“I was lucky enough to be affiliated with one football club for all 11 years of my CFL career,” said Brown.

“The Bombers are 86-years-old and so to be recognized by a club that has such a storied history with so many players that defined the Canadian football landscape is very humbling and a tremendous honour.”

The Canadian defensive tackle is the ninth and final inductee to the Ring and will be honoured when the Bombers host Ottawa on October 29 at Investors Group Field.