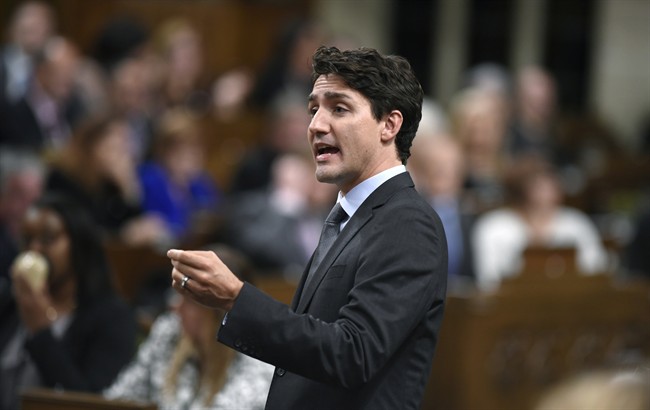 OTTAWA – When it comes to keeping promises, Canadians know full well that politicians are not at all like Horton, the Dr. Seuss character who “meant what I said and I said what I meant: an elephant’s faithful, 100 per cent.”

They make many promises to win elections, but often find it impossible to deliver on them once they take office.

Justin Trudeau is no exception.

He made more than 200 promises in last fall’s election campaign. After one year as prime minister, he’s kept more than he’s broken — but most are still in progress or yet to come. Some are open to interpretation, while still others have been recalibrated. Here’s a look at the main ones:

— A cabinet with as many women as men.

— Create an arm’s length advisory board to recommend merit-based, non-partisan nominees for the Senate.

— Ensure process of appointing Supreme Court justices is more transparent, inclusive and accountable to Canadians. Trudeau’s only pick for the top court thus far, Malcolm Rowe, was one of five recommended by a new independent, non-partisan advisory board. The board’s chair, one-time prime minister Kim Campbell, and Rowe are to appear separately to answer questions about the appointment from a Commons committee.

— Launch a national inquiry into missing and murdered indigenous women.

— The first phase ($11.9 billion over two years) of an additional $60 billion over 10 years in infrastructure spending.

— Restore the age of eligibility for old age security and guaranteed income supplement to 65 from 67.

— Work with the provinces to enhance the Canada Pension Plan.

— Provide a refundable tax benefit of up to $150 to teachers who spend their own money on school supplies.

— Invest $2.6 billion over four years for First Nations education, although it is now over five years.

— Restore funding cut by the Conservatives for the CBC.

— Increase financial benefits for veterans whose careers are impacted by injury.

— Welcome 25,000 Syrian refugees to Canada, although it took several months longer than promised and only about 15,000 were government-assisted refugees; the rest were privately sponsored.

— Increase funding for student grants by 50 per cent.

— Reform employment insurance to reduce the wait time before claiming EI, cut the number of hours an individual must have worked to receive benefits.

— Repeal Conservative legislation that allowed the government to revoke the citizenship of dual citizens convicted of terrorism, treason or espionage.

— Run deficits of less than $10 billion in each of the first three years of the mandate, still reducing the debt-to-GDP ratio each year and balancing the books in the final year. The Liberals’ inaugural budget projects deficits for at least five years, totalling $113 billion, including almost $30 billion this year alone. The government hopes to lower the debt-to-GDP ratio over the course of the mandate.

— The tax break for middle-income earners was to be “revenue neutral,” paid for by hiking taxes on the wealthiest one per cent. In fact, it will cost the federal treasury $1.2 billion a year.

— Reduce the small business tax rate to nine per cent from 11 per cent.

— Maintain funding level for the Canadian Armed Forces. Government pushed back $3.7 billion for new equipment to 2020.

— Immediately scrap the planned $44-billion purchase of F-35 stealth fighter jets, launch open and transparent competition to replace the current CF-18 fighter jets and reallocate the savings to the navy.

— Immediately invest $3 billion over four years to improve home care. This promise is now tied to negotiations with the provinces and territories on a new health accord which the government hopes to have in place next year.

— Cap how much can be claimed through the stock option deduction on annual gains higher than $100,000.

— Trudeau’s verbal promise to “restore” door-to-door home mail delivery. The government is committed only to stopping any further reduction in home delivery while it conducts a review of Canada Post’s operations.

— Replace Canada’s first-past-the-post voting system by the next federal election. An all-party committee is to report by Dec. 1 on the best alternative but a consensus may yet prove impossible to find.

— Legalize marijuana. A task force is to report by Nov. 30 and the government is promising legislation next spring.

— Overhaul the Access to Information Act to make government open “by default.”

— Amend controversial anti-terrorism legislation passed by the previous Conservative government. The government has launched consultations and is in the process of creating a parliamentary oversight committee on national security.

— Renew commitment to peacekeeping. The government has announced it will commit up to 600 troops and 150 police officers to UN peacekeeping missions but has yet to decide where to deploy them.

— Implement all 94 recommendations made by the Truth and Reconciliation Commission on the lingering effects of residential schools on indigenous peoples.

— Cover the cost of four years of post-secondary education for every vet.

— Reform the operation of Parliament, including empowering backbenchers with more free votes, a weekly prime minister’s question period, more open board of internal economy meetings and an end to omnibus bills.

— Create an office of counter-radicalization to deal with the phenomenon of home-grown extremists.

— Adhere to the principles of the United Nations Declaration on the Rights of Indigenous Peoples, which states that no law or project can proceed without the “free, prior and informed consent” of indigenous people impacted by them. Some aboriginal leaders believe that confers a veto over natural resource projects. The government, which recently approved the Site C hydro dam and Pacific NorthWest LNG terminal in B.C. over aboriginal objections, says it doesn’t.

— Collaborate with premiers. Trudeau has met twice with first ministers to craft a national strategy on climate change and is scheduled to do so again before the end of the year. But he’s also infuriated some premiers by unilaterally announcing that the federal government will impose a floor price on carbon pollution — $10 per tonne starting in 2018 rising to $50 per tonne by 2022 — on provinces and territories that don’t do it on their own.

He’s further angered them by sticking with the previous Conservative government’s unilateral decision to limit annual increases in health transfer payments to the provinces to no more than three per cent, ending the six per cent escalator that’s been in place since 2004.

— Restore public trust in environmental assessments of resource-based projects. While it develops new rules, the government has established an interim process imposing more stringent environmental hurdles and consultations with indigenous peoples. But the National Energy Board’s review of the controversial Energy East pipeline proposal has been stalled due to complaints about NEB members meeting privately with proponents of the project.

— Lift the two-per-cent cap on annual First Nations program funding. Indigenous Affairs Minister Carolyn Bennett insists the cap was lifted in the government’s inaugural budget, which included a “historic” investment of $8.4 billion over five years for aboriginal education, water systems, family and child services and other programs. But some First Nations chiefs are suspicious that the cap won’t actually be lifted for another year.