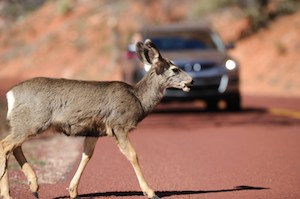 If you live in southeast Manitoba, you have a greater likelihood hood of running into wildlife while behind the wheel.

According to Manitoba Public Insurance, there are about 1,600 collisions annually in the Eastman region, which includes Steinbach, Lac du Bonnet, Anola, Birds Hill Park area and Falcon Lake.

“Motorists are encouraged to exercise extra care and caution during October and November — the two worst months for vehicle-deer collisions,” said Ward Keith with MPI.

“Last year, 300 Manitobans were injured in wildlife-related collisions. Over the last 10 years, eight people in Manitoba have been killed in crashes caused by an animal on a road.”

Tips to help keep you safe: