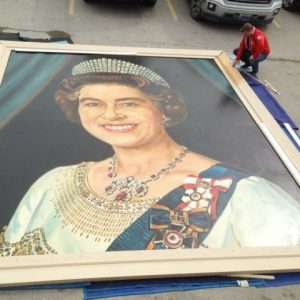 A giant portrait of Queen Elizabeth II that hung in the Winnipeg Arena. (KIJIJI)

The giant portrait of Queen Elizabeth II that was a staple of the old Winnipeg Arena has found a new home, albeit temporarily.

It’s an unlikely location for the five-metre by seven-metre painting — believed to be the largest known portrait of the Queen — but The Pint will house the piece of artwork on Thursday.

Jamie Boychuk, an executive with CN Rail, was one of two men who bought the painting last year before putting up for sale on Kijiji for an undisclosed price.

A media notice says the unveiling will take place outside of The Pint at 1 p.m. and will hang on the south wall of the Garry Street pub for about 12 hours.

“With the Heritage Classic being in Winnipeg this year, we feel it is the right time for the painting to be displayed and celebrated,” Boychuk told The Canadian Press in an interview in August.

The painting was originally created by billboard artist Gilbert Burch in 1979. It hung from the rafters of the Winnipeg Arena for 20 years and was removed in 1999 in preparation for the Pan Am Games. It spent much of its time between then and now inside storage at a Whitby, Ont. warehouse.