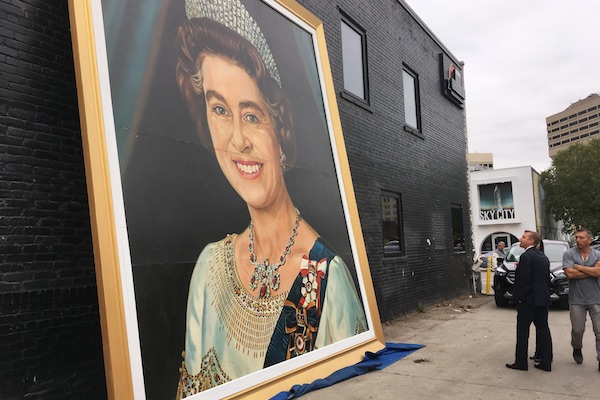 A portrait of Queen Elizabeth II rests against the south wall of The Pint pub on Garry Street, Thursday, October 20, 2016. (CHRISD.CA)

WINNIPEG — A giant portrait of Queen Elizabeth II is back in Winnipeg and resting up against the wall of a downtown pub.

After a few tense moments on Thursday (seriously, the thing almost split in half), crews at The Pint erected the portrait to celebrate this weekend’s NHL Heritage Classic. It will be guarded by security while during its 12-hour stay.

The portrait hung from the rafters of the Winnipeg Arena for 20 years and was removed in 1999 in preparation for the Pan Am Games. It spent much of its time between then and now inside storage at a Whitby, Ont. warehouse.

Owner Jamie Boychuk, an executive with CN Rail, was one of two men who bought the painting last year before it was put up for sale on Kijiji for an undisclosed price.

The painting was originally created by billboard artist Gilbert Burch in 1979.