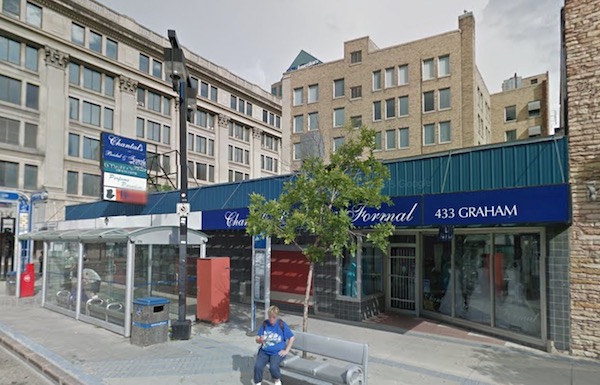 A former bridal shop at 433 Graham Avenue has been revitalized by two local entrepreneurs into a trendy clothing store. (GOOGLE STREET VIEW)

WINNIPEG — Graham Avenue is the latest strip in the city’s downtown to receive a makeover with trendy shops popping up, True North Square under construction and now a new storefront for a local fashion designer.

Eric Olek has teamed up with emerging local artist Josiah Koppanyi under the umbrella of Centre Venture’s PUSH program. The two have converted a bridal shop into a trendy clothing store and art gallery at 433 Graham Avenue called Friday Knights. The shop is part of Olek’s nationwide 31-store deal with retailer Below The Belt.

“There seems to be a boom happening here right now and with True North Square on the way, I think Graham Avenue is going to become a big hub for activity in our city,” Olek said.

In an effort to revitalize a portion of the downtown strip, the two entrepreneurs plan to brighten up the neighbourhood with their space. The store will host private gallery showings, community events and be a hub for exclusive product releases.

Under PUSH, their term will be up in January, at which time they can decide whether to lease the storefront permanently.

Olek believes that what was once a dead zone for retail will soon rival the likes of Osborne Village and the Exchange District.

The fashion brand started as in 2011 with a student loan to help grow the street wear scene in Winnipeg. Olek says its growth thus far has been thanks to the support of the local and national hip-hop community.