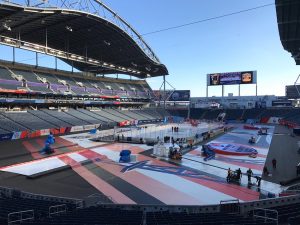 Crews work on the ice surface at Investors Group Field on Friday, October 21, 2016 ahead of the NHL Heritage Classic. (CHRISD.CA)

WINNIPEG — Eager members of the local and national media hoping to take a spin on the freshly-flooded NHL Heritage Classic rink were defeated by Mother Nature on Friday.

Scribes, reporters, and camera personnel put down their notepads and gear for a planned 45-minute skate at Investors Group Field. But light rain earlier in the afternoon softened the rink surface and had crews maintaining its condition for the weekend’s main festivities.

Crews arrived on October 9 with a mobile refrigeration unit used to pump 3,000 gallons of glycol coolant into custom-made aluminum trays to make up the rink’s edges. By last Friday, the rink surface began to be flooded. Splash on some painted lines and put up the rink boards, and you have yourself an official league rink.

Mike Craig, the NHL’s senior manager of facilities operations, said at the time the long-term forecast was playing in their favour. Some mild precipitation this morning didn’t throw things off schedule either due to the rink’s controlled temperature of about -5.5ºC, but better safe than sorry.

NHL players, staff and their families hit the rink on Friday morning.

The Alumni Game is Saturday at 3 p.m., while the Winnipeg Jets and Edmonton Oilers face off on Sunday at 2 p.m.