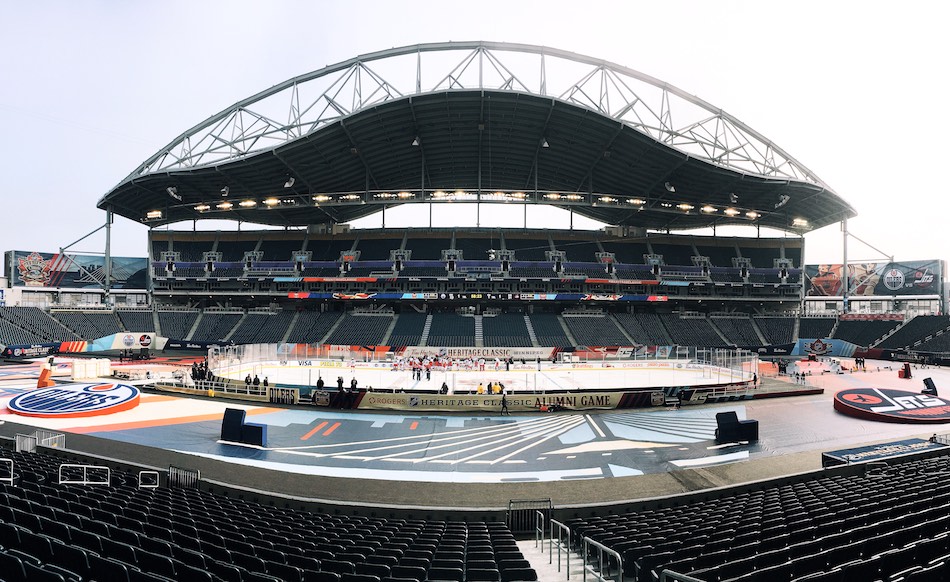 WINNIPEG — As a dense fog rolled back early Saturday afternoon, both the Edmonton Oilers and Winnipeg Jets took to the outdoor rink at Investors Group Field for the first time.

The two practices were just part of a busy Heritage Classic Saturday, which played the role of Christmas Eve in Winnipeg – building anticipation for Sunday’s regular season matchup.

“It’s a pretty cool atmosphere, even without any fans in the seats. I couldn’t imagine what it’ll be like tomorrow with the place packed,” said Jets centre Mark Scheifele.

For the Jets players, top of mind is preparing for the outdoor conditions, but also the reward of having their families around to watch the game.

“Anytime you get to go skate on an outdoor rink as an (NHL player), it’s fun. The day was perfect,” said defenceman Dustin Byfuglien – who added a caveat when asked about whether it tops his off-season hobby, “Nothing will ever be as good as fishing.”

“The best memory you have as a kid – personally for me – is it’s snowing outside and the lights are on, it’s 10 or 11 o’clock at night and your mom lets you stay out to play hockey,” said Scheifele, adding, “To be a part of something like this is something I’ll definitely cherish forever.”

Highlighting Saturday’s events was the Alumni Game, which featured NHL greats from both franchises. For the Jets and Oilers, the old faces might have more dramatic memories than the new ones, after a one-sided rivalry from 1983 to 1990 saw the Oilers break the hearts of Jets fans six times in the postseason.

Suiting up from those Oilers teams were Mark Messier and Wayne Gretzky, while the Jets had fan favourites in Dale Hawerchuk and Teemu Selanne.

Selanne was the star early in the game, scoring the first goal on a penalty shot, then adding two assists. He got another point while mic’d up for an in-game interview, with a witty quip that he’d use his new Winnipeg key to the city to “open the Palomino Club” for Saturday night.

The Jets rode Selanne’s start to a 4-1 lead, but the Oilers answered with three straight goals to start the second, followed by both teams scoring in the third. The dramatic finish ended with Selanne himself, scoring on a penalty shot with just three seconds left to give the game its 6-5 final.

Nostalgia in the air

For the 33,317 Jets and Oilers fans in attendance, though, this game was less about the result, and more about reliving fond memories.

“I grew up in that era but didn’t get to see them play,” said Reid Stastook, a St. Andrew’s resident, before the game. “It’s a great event. I feel like hockey has grown here the last three or four years and this is an example. I hope every city gets to experience this at some point.”

The unique outdoor nature of the event brought out former players too, including Michael Power, a former goalie who was drafted by the Oilers in 1980 and played one season with Gretzky, Messier and Grant Fuhr.

“For my kids, I grew up playing the game outside – pond rinks, outdoor rinks, on the street – I think this generation doesn’t do that as much, for lots of reasons. So getting outside and seeing a hockey game live is pretty spectacular,” said Power.

“My wife said to me 25 years ago that this was a bucket list opportunity, seeing one of these outdoor games, and that’s why we’re here today.”

Beautiful weather punctuated that bucket list item for many fans, which brought cool, clear conditions for fans to take advantage of. Tomorrow promises similar weather, with a high of 9 degrees and sun in the forecast.

Sunday’s Heritage Classic game is the first of its kind in Winnipeg, as the Jets (2-2-0) host one of three outdoor NHL games being held this season. The Oilers (4-1-0), meanwhile, will be in for their second crack at exposed ice – they hosted the first Heritage Classic in 2003, albeit with a much different roster than the youthful group they have now.