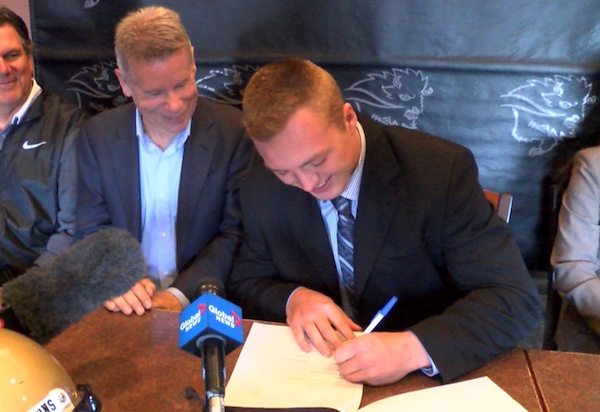 WINNIPEG — Brody Williams was heavily recruited across Canada and the United States, but in the end, there’s no place like home.

The 17-year-old, 5’11”, 210 lbs. St. Paul’s Crusader linebacker/long snapper inked a letter of intent with the University of Manitoba Bisons on Tuesday in front of family and the media.

“Today is the beginning of a new part of my journey,” Williams said. “A journey that has taken myself and my family to many places. I want to thank God for blessing me with the ability to play the game of football at a high level.”

Williams is finishing high school, but already has several accolades to his name. The Oakbank native joined the Crusaders as the only Grade 9 student to make the AA varsity team as a starter and long snapper. He was also voted captain while making the league defensive all-star team and won the Kas Vidruk Championship in 2013.

“Not only is Brody an exceptional linebacker, he is even more so an outstanding young man and leader,” said head coach Brian Dobie.

“Despite many other options, we are honoured that Brody has chosen the University of Manitoba to pursue his academic and athletic dreams and goals.”

The Bisons welcome the University of Regina Rams to Investors Group Field this Saturday at 8 p.m. for their last regular season game.