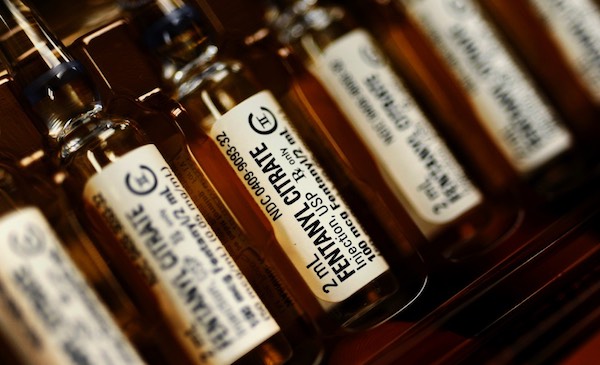 WINNIPEG – Two parents are in police custody facing several charges after their baby boy suffered a possible overdose of the powerful opioid fentanyl.

Const. Jason Michalyshen said paramedics were called to a Winnipeg home last week and found the nine-month-old in critical condition. Officers also found a powder which they believed to be fentanyl.

He said a search of the home found 285 grams of suspected fentanyl powder, along with a cutting agent and other contaminated paraphernalia, Michalyshen said.

The biological parents — a 33 year-old man and 32-year-old woman who police are not naming — have been charged with failure to provide the necessities of life, causing bodily harm by criminal negligence and drug trafficking, Michalyshen said.

The baby boy has been upgraded to stable and is in care, he said.

The child’s life was probably saved by officers, who immediately noted the presence of fentanyl in the home, which allowed him to be properly treated with an antidote, he said.

“Limited information was being provided to us,” Michalyshen said Tuesday. “This was not something that was divulged to officers, investigators, emergency personnel, that the child’s situation may be as a result of drug or a substance within the home.”

Although the baby’s condition improved immediately following the antidote, Michalyshen said police are still waiting for confirmation from Health Canada that the drug they found is fentanyl.

The investigation is continuing. Michalyshen said it’s still not entirely clear how the baby came into contact with the drug.

“Obviously a nine-month-old child is not walking around, typically, and would not necessarily have access to something like this,” he said.

“The child may have had inadvertent contact with what we believe to be fentanyl. This might be from hand-to-hand contact or clothing to the child or other items — a bottle, a toy.”

Police and health officials say fentanyl poses a serious threat to public safety across North America. The opioid is used as a painkiller for terminally ill cancer patients and is 100 times more powerful than heroin.

Just a tiny amount of residue would be enough to hurt a young child with developing lungs, Michalyshen said.

“The effects, potentially, are fatal,” he said. “It takes the risk to a completely other level where you have an innocent child who is subjected to and potentially has contact with such a potent and such a hazardous substance.

“The effects and the ultimate outcomes can be so incredibly tragic … Now young children are being impacted as a result of those poor choices and decisions.”