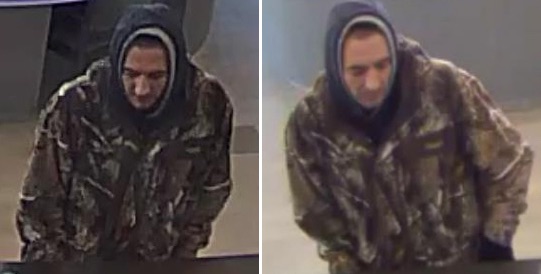 RCMP are looking for a man they say held up a bank in Starbuck, Manitoba on Monday, October 24, 2016. (RCMP HANDOUT)

RCMP are looking for a man in his 20s who held up a financial institution in Starbuck, Manitoba on Monday.

The robbery happened at around 10:45 a.m. when a man approached a teller with a note demanding large bills. He fled on foot with an undisclosed amount of cash.

The suspect is described as having fair skin, 6’0″ tall and approximately 200 lbs. He was wearing a green camouflaged jacket on top of a black hoodie, brown or beige pants, and gloves.

No weapons were used and nobody was injured.