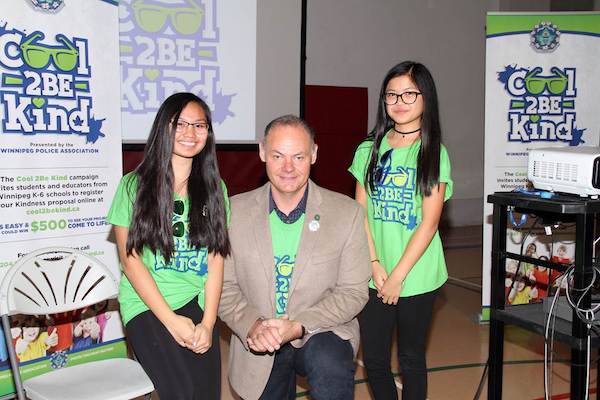 An annual initiative to curb bullying launched Friday at Isaac Brock School as the Winnipeg Police Association’s Cool 2Be Kind campaign got underway.

The campaign teaches students in grades K-6 the value of being kind to others and making positive choices in school and in life.

“The issue of bullying in and out of schools, including cyber-bullying, continues to be of concern to everyone,” said WPA president Maurice Sabourin.

“Five years ago, the Winnipeg Police Association decided to take a pro-active approach to anti-bullying by recognizing and funding the efforts of students and educators to develop Kindness projects.”

Students and educators can submit a Kindness proposal for their school for a chance to receive $500 in funding to achieve their project.

The Cool 2Be Kind campaign has funded 83 school Kindness projects totalling over $40,000 in the past four years.

“We have spoken to over 20,000 students and educators. The response has exceeded our expectations and we are looking forward to another successful year,” Sabourin added.