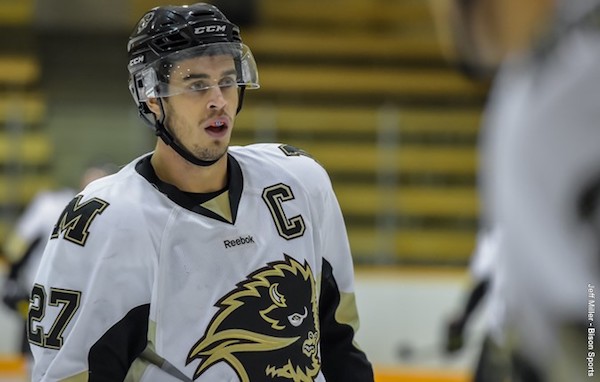 Forward Jordan DePape will don the ‘C’ as the Manitoba Bisons head into their third week of the 2016-17 conference season.

Forward Brett Stovin, plus defencemen Adam Henry and Lee Christensen will be the alternate captains for Manitoba this season.

“They are leaders who lead by example on the ice, in the classroom and in the community. They are honoured to represent the Bisons and are excited to uphold the standard of excellence set by previous Bison captains.”

DePape, 24, is a captain for a third consecutive season (he was a co-captain last season and an alternate in 2014-15) playing in his fourth season with Manitoba. The 6’0”, 195 lbs. forward was selected as a 2015-16 CIS Second Team All-Canadian (his first CIS All-Canadian selection) while named as a 2015-16 Canada West First Team All-Star.

The Bisons play the UBC Thunderbirds in a weekend series at the Wayne Fleming Arena. Puck drop is tonight at 7 p.m. and Saturday at 7:30 p.m.