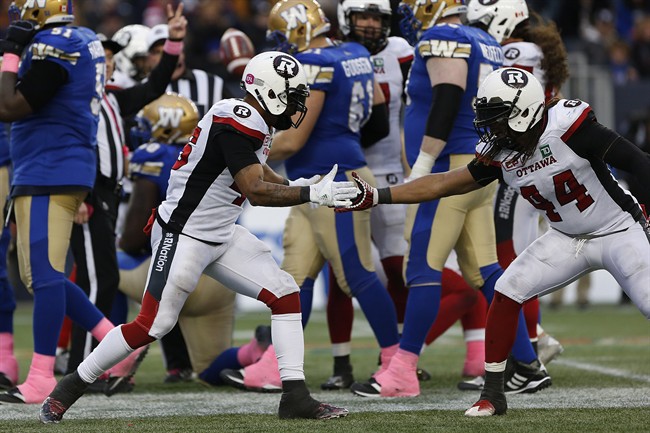 WINNIPEG — Throughout this season, the Winnipeg Blue Bombers have feasted off their opponent’s turnovers. When they take the ball away, and do it often, good things tend to happen.

On Saturday, that script flipped. The Bombers coughed up five turnovers against the Ottawa REDBLACKS, with many of their best drives ending prematurely, eventually resulting in a 23-10 loss.

Unfortunately for Winnipeg, one of their steadiest players was the main culprit, as quarterback Matt Nichols threw a season-high three interceptions in the loss.

“It’s on me, and anytime you don’t score points on offence, it falls on the quarterback,” said Nichols. “So I feel like I kind of let the guys down tonight and I picked a bad time to play my worst game of the season.”

Coming into the game, Nichols had thrown just five picks to 15 touchdowns, a ratio that was serving the Bombers offence well. In this one, though, many of his throws looked to have too much air, as floaters made easy work for Ottawa. Two of the picks went to defensive back Abdul Kenneh, the other to Mitchell White.

Nichols would throw 35-for-46, for 289 yards and a late touchdown, as the Bombers fell to 10-7 in front of 26,097 fans at Investors Group Field. The other two Bombers’ turnovers were on downs, the second coming just outside of Ottawa’s red zone as Winnipeg went shotgun on 3rd and one.

“We’ve run there and been very successful. There was no reason to think we wouldn’t be successful,” said Bombers coach Mike O’Shea.

Winnipeg’s defence, meanwhile, struggled early as they allowed Ottawa quarterback Henry Burris to deal in the first 20 minutes. Burris started 11-for-11, running in a touchdown in the first quarter to finish a monstrous 11-play, 101-yard drive. He also engineered a scoring drive in the second, which ended in a running score for Mossis Madu Jr.

With a 17-3 halftime lead, the 41-year-old Burris looked especially ageless on a third quarter throw, jumping off one foot to sail a long gain to Brad Sinopoli. That drive would end in a field goal, giving the REDBLACKS a 20-3 lead. Burris would finish 23-for-33, throwing for 338 yards and one interception.

“That’s not us. Even if the offence is doing well or struggling, what we do is take the ball away and we didn’t do that. We weren’t aggressive like that,” said Bombers linebacker Moe Leggett.

The Bombers’ defence was steady after that, but their offence was unable to give them any help until very late in the fourth — with ten seconds left to be exact — when a Darvin Adams touchdown gave the game its 23-10 final score. Returning from long-term injury, Adams was one of two bright spots for Winnipeg, as he caught nine balls for 87 yards.

“I felt good, just to be back out there catching balls and stuff like that, but I like winning. So that doesn’t even matter right now,” said Adams.

The other positive was running back Andrew Harris, who had 98 running yards and 41 through the air on eight receptions.

“We were flat, I definitely felt that,” said Harris. “Second quarter, even in the huddle, trying to get guys to get that momentum and our attitude up, and we were just flat today. Every dog has his day, and it’s a tough battle, but this is crunch time and we need to be better.”

“We have to score more points than three,” said Nichols, referring to meaningful scores. “Our defence held a high tempo, high-scoring offence to 23 points. That’s more than enough for us to come away with the win. So we have to be better on offence and that starts with me.”

The Bombers came into this game chasing the carrot of a home playoff game, but were unable to get closer in their second-to-last regular season outing. With a loss, they’ll carry that goal to Ottawa, as they need to at least tie the 10-6 B.C. Lions in the final standings to host a first round game.

That game’s kickoff will be this upcoming Friday, November 4, at 6 p.m. CST.