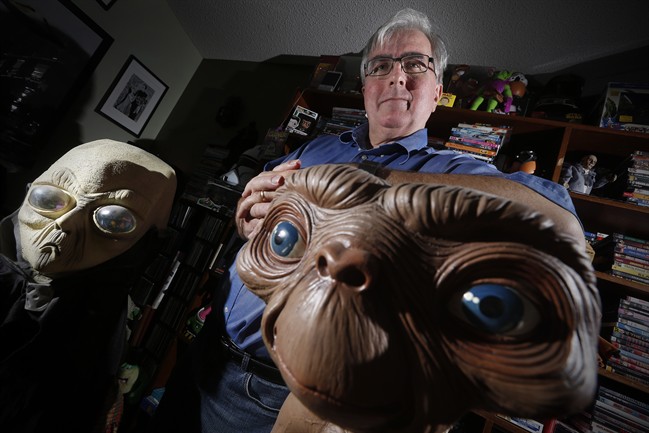 Chris Rutkowski, Canada’s foremost UFO expert, whose day job is at the University of Manitoba is photographed in his Winnipeg home, Saturday, October 29, 2016. After three decades being known as one of Canada’s top UFO experts, Chris Rutkowski doesn’t mind a bit of good-natured ribbing now and then. (THE CANADIAN PRESS/John Woods)

WINNIPEG – After three decades being known as one of Canada’s top UFO experts, Chris Rutkowski doesn’t mind a bit of good-natured ribbing now and then.

“People will sometimes give me Marvin the Martian toys for Christmas,” says Rutkowski, who researches unidentified flying objects in his off time from his day job as a University of Manitoba’s communications co-ordinator.

Rutkowski, who is with Winnipeg-based Ufology Research, has long been fascinated by reports of mysterious lights and unusual objects in the sky that defy easy explanation.

“There is a real phenomenon I think is worth scientific study,” he says.

“It’s something I think people should be talking about. It’s a wonderful way to think of the universe, our place in the universe.”

His interest was first sparked in the 1970s when he was studying astronomy and calls came in about UFO sightings.

“My colleagues in astronomy were simply not interested. They thought it was simply pointless, or hallucinations, or people were just seeing things, spots before their eyes.

“I was curious what people were actually seeing and experiencing so I took the calls.”

He says there are more than 1,000 UFO reports in Canada a year.

He figures about 95 per cent of the sightings he investigates can be explained. The strange objects often turn out to be airplanes, satellites, fireballs or — more recently — drones.

For the rest, there’s nothing to suggest that otherworldly visitors are responsible — as tempting an explanation as that may be for some.

“There’s no incontrovertible evidence that aliens are visiting us, although it’s a wonderful theory.”

Lately, Rutkowski has been hearing more reports from people claiming they’ve been in contact with aliens.

“There’s no proof of that and it’s very, very prevalent that people are believing things that seem very, very far-fetched.”

Rutkowski says those sorts of claims tend to spike during tumultuous times in world history — amid mounting Cold War anxieties in the 1950s, for instance.

“The world seems so overwhelming and life seems so impossible. People are worried about what will happen in their lives … (so) they’re looking for creatures from elsewhere to come and save them,” he says.

“That’s wonderful wishful thinking, but it’s not really helping the scientific analysis of this phenomenon.”

Rutkowski’s current work delves into historical UFO sightings. He’s been digging into government, police and military documents from the last half century.

The 50th anniversary is coming up next year for two of the best-known unexplained Canadian cases: accounts of an unusual, lit-up object crashing into the water off Shag Harbour, N.S., and a prospector who suffered burns during a reported encounter with mysterious discs in Falcon Lake, Man.

Most UFO reports come from big population centres, but a statistically disproportionate amount tend to come from the North and the Maritimes.

Rutkowski doesn’t know why that is — perhaps an avenue for future research.

He says the snapshot it provides of society is almost as fascinating as the UFO phenomenon itself.

“If there isn’t a physical phenomenon, there’s at the very least a psychological or a sociological phenomenon, and in any of those cases, science really should be taking a closer look at the UFOs.”