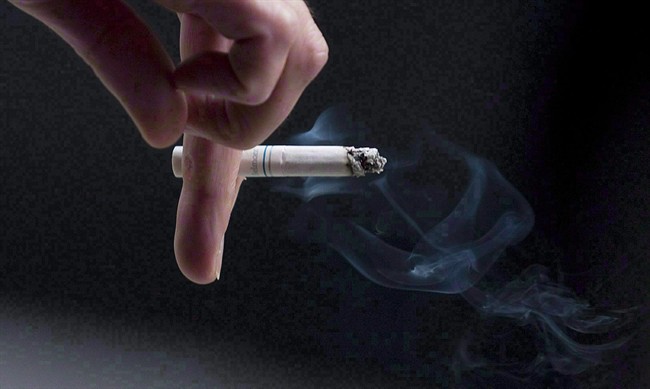 A person smokes a cigarette in downtown Ottawa on Sept. 29, 2009. (THE CANADIAN PRESS/Pawel Dwulit)

A new report from the Western Convenience Stores Association (WCSA) says Brandon City Hall is the site of the most illegal cigarette butts in Manitoba.

The WCSA commissioned a contraband tobacco study to examine discarded cigarettes butts at 30 sites throughout the province. The study looked at how many were of the contraband variety while collected between September 25 and October 8, 2016.

The average rate of illegal tobacco province-wide has increased to 14.7 percent this year, compared to 12.7 percent in 2015.

“Illegal tobacco is once again a growing problem in Manitoba,” said Andrew Klukas, president of the Western Convenience Stores Association. “Illegal tobacco is easily accessible at schools and in communities across the province.”

Brandon had the highest average in the province with a rate of 20.2 percent at the six sites tested.

Contraband cigarettes are sold without mandated health warnings on packages and without age-verification checks. Tax revenue on the cigarettes are also diverted from the province and often linked to organized crime, according to the WCSA.