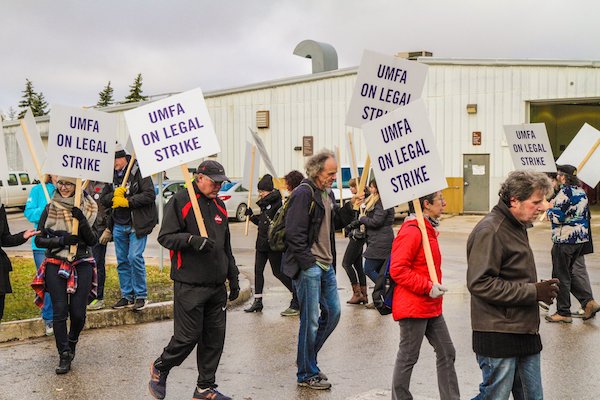 University of Manitoba staff picket on the U of M’s Fort Garry campus, Tuesday, November 1, 2016. (HOWARD WONG / FOR CHRISD.CA)

WINNIPEG — It was anything but business as usual Tuesday morning at the University of Manitoba as faculty hit the picket lines at the Fort Garry and Bannatyne Avenue campuses.

About 1,200 staff, represented by the University of Manitoba Faculty Association, went on strike at 7 a.m. after talks broke down surrounding a new collective agreement with the U of M. Picketers are set up at all the main entrances holding signs that read, “UMFA on legal strike.”

Most classes at the U of M will be cancelled, but the status of individual programs can be found here. A separate strike information page has bargaining updates and FAQs for both staff and students.

“We’ll be at conciliation and we’re hopeful … that that will produce results, but picket lines will remain up during the conciliation process,” faculty association president Mark Hudson said.

About 29,000 students attend the University of Manitoba.

The U of M’s offer was a seven percent wage increase over four years for one-third of eligible members for incremental raises. The faculty wanted a 6.9 percent raise in one year.

The university put forward a final counter offer on Monday morning, which the UMFA quickly rejected. The U of M has requested a provincially-appointed mediator to help both sides come to an agreement. Talks are expected to resume on Wednesday.

The two sides have been in discussions since the faculty’s contract expired March 31.

The last time the university’s faculty went on strike was in 2001.

— With files From The Canadian Press