Home » News » ‘Kevin Bacon,’ the Runaway Pig, Rounded Up by Police and Returned to His Owner

‘Kevin Bacon,’ the Runaway Pig, Rounded Up by Police and Returned to His Owner 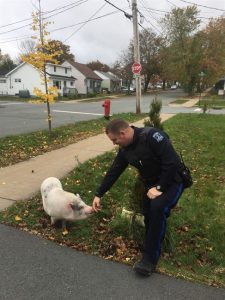 A wayward pig named Kevin Bacon has been returned to his owner, thanks to a couple of bemused police officers. Const. Cody Schultz lets pig Kevin Bacon smell his hand in this undated police handout image. (THE CANADIAN PRESS/HO-Halifax Regional Police)

HALIFAX – A wayward pig named Kevin Bacon has been safely returned to his owner, thanks to a couple of bemused police officers who found the portly animal waddling “footloose and fancy free” down a residential street.

Members of the Halifax force were called to an area around Russell Street in Dartmouth on Tuesday after people out for a walk came upon the potbellied pig and notified police.

“He was lovely — he was very happy to see them and very friendly and wasn’t scared to see them,” said police spokeswoman, Const. Dianne Woodworth. “He’s adorable.”

When asked about the demeanor of the pig — named for the star of the 1980s movie Footloose — Woodworth chuckled and said, “I think he was just excited to be out front. You could say he was footloose and fancy free.”

She said Bacon was not in any danger and was following the rules of the road by staying on the sidewalk, adding that he hadn’t ventured far from his home after likely escaping from his backyard.

She said the officers didn’t have a hard time rounding him up, making the apprehension of Bacon likely a first for the force.

“We’ve had deer loose in the city and even a moose, but not a pig that I’m aware of,” she said with a laugh.

A picture posted on the force’s Facebook page showing one of the officers reaching out to the pig generated more than 1,200 likes and dozens of comments, including one from a woman who said, “Good thing they found Kevin before he became Chris P Bacon lol!”

Another said, “You guys literally live in the most bizarre city in Canada I swear.”

The officers managed to load him into the back of a police vehicle, where he could be seen peering out the rear window with an apparent grin on his grey and white face.