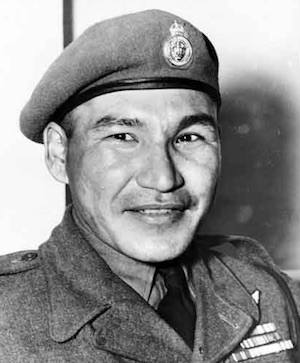 WINNIPEG — A plaque honouring Sgt. Thomas ‘Tommy’ Prince will soon be installed at the Manitoba legislature.

The plaque was unveiled in the rotunda on Tuesday, and will eventually sit in the building’s Hall of Honour.

Prince became one of the most decorated First Nations veterans in Canadian history, serving in both the Second World War and the Korean War.

“We owe a huge debt of gratitude to all the members of our Canadian Armed Forces who have served our nation in times of war and peace,” said Indigenous and Municipal Relations Minister Eileen Clarke.

“Over 12,000 First Nations people served in the First and Second world wars and also in the Korean War.”

Prince was born in Scanterbury and was a member of the Brokenhead Ojibway Nation. He died in November 1977 and is buried in Winnipeg’s Brookside Cemetery.

The plaque will be permanently installed later this week.

An honour to mark #AboriginalVeteransDay in the Legislature by unveiling a new plaque for legendary Aboriginal war hero Sgt. Tommy Prince pic.twitter.com/WPGxoFob9s