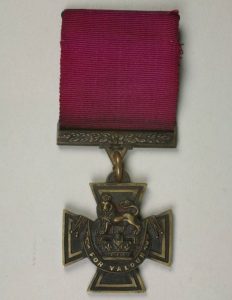 The Victoria Cross of Corporal Frederick Coppins is now on display at the Manitoba Museum. (HANDOUT)

To commemorate Remembrance Day, the Victoria Cross of Corporal Frederick Coppins is on display at the Manitoba Museum.

The medal is on display from now until December 4, 2016 in the museum foyer.

Corporal Coppins, a member of the 8th Infantry Battalion, CEF, and his platoon were pinned under machine gun fire in an open field at Amiens, France in 1918. Facing certain death, he and four comrades stormed the machine gunners.

The medal, on loan from the Royal Winnipeg Rifles Regimental Museum, is accompanied by recently discovered footage of Coppins himself, filmed during WWI.

Public viewing of the medal is free of charge.