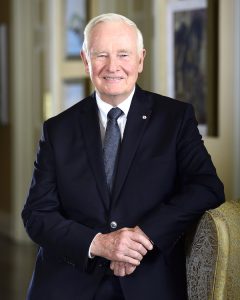 WINNIPEG — Governor General David Johnston will pay the city a visit on Tuesday.

Johnston will begin his day by presenting the Governor General’s Awards in Commemoration of the Persons Case. The awards will be presented at the Manitoba Legislative Building to six laureates to highlight their contributions in advancing equality for women.

Johnston will then participate in a discussion to promote Indigenous women’s rights at Feast Café Bistro on Ellice Avenue. He will be joined by Rochelle Squires, minister responsible for Status of Women, as they discuss the theme “Indigenous women in arts,” and will tie together culinary art, visual art, literature and film. Joining them will be Christa Bruneau-Guenther, owner of Feast Café Bistro, artist Jackie Traverse, Métis writer Katherena Vermette, and Sheila North Wilson, the first female grand chief of Manitoba Keewatinowi Okimakanak.

The Governor General’s final stop of the day will be at Composites Innovation Centre, where Johnston will receive an overview of the centre’s mission and learn about the different projects in progress while touring the facility and meeting with researchers and business representatives.

Johnston’s term as Governor General is up in September 2017.