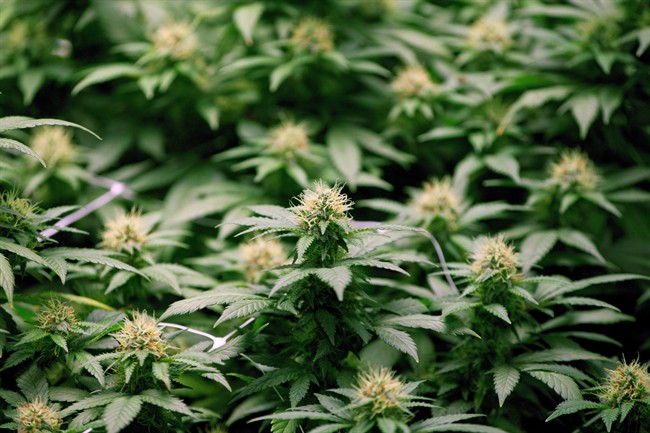 Growing flowers of cannabis intended for the medical marijuana market are shown at OrganiGram in Moncton, N.B., on April 14, 2016. The Canadian Automobile Association is lobbying for a government-funded public education program to warn of the dangers of cannabis-impaired driving before Canada legalizes recreational pot. Police will also need more funding to learn how to recognize and investigate drug-impaired drivers, says the CAA. (THE CANADIAN PRESS/Ron Ward)

The federal government’s promise to legalize marijuana has some Canadian motorists worried about safety behind the wheel.

New numbers from the Canadian Automobile Association report nearly two-thirds, or 63 percent, of those surveyed feel roadways will become more dangerous once the Trudeau government lifts restrictions on the drug.

“CAA National and CAA Manitoba are committed to making sure road safety is a top priority as marijuana is legalized,” said Erika Miller, public and media relations specialist for CAA Manitoba.

“Undoubtedly, public education must play a large part in the issue — just as it did just with drinking and driving.”

CAA also found 26 percent of Canadians between the ages of 18 and 34 believe a driver is either the same or better on the road under the influence of marijuana.

During a study by the Canadian Centre on Substance Abuse, they found marijuana impairs the cognitive and motor abilities necessary to operate a motor vehicle and doubles the risk of crash involvement.

Cannabis has a half-life of about two hours in the human body, which further complicates police efforts to accurately measure drivers’ THC levels in a timely fashion.

“To conclude, cannabis-impaired driving is complex and it will require a continuum of road safety strategies to complement the new legislative changes to cannabis regulation,” states the Traffic Injury Research Foundation report.

Legislation to legalize marijuana is expected to be introduced by spring 2017.

The findings, conducted by the Traffic Injury Research Foundation, were based on polling 2,012 Canadians. A probability sample of the same size would yield a margin of error of +/-2.2%, 19 times out of 20.