By Bruce Cheadle, The Canadian Press 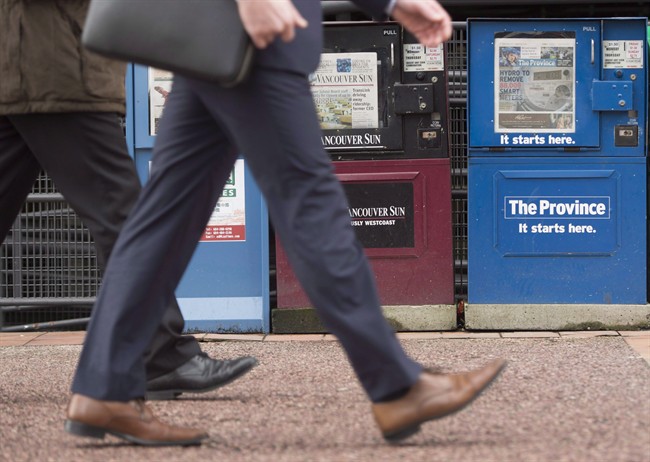 A man walks past newspaper boxes containing the Vancouver Sun and the Province in downtown Vancouver, Tuesday, Jan. 19, 2016. (THE CANADIAN PRESS/Jonathan Hayward)

OTTAWA – The publisher of a small southern Manitoba family of weekly newspapers made an appeal for back-to-basics local reporting Thursday to a group of MPs examining Canada’s beleaguered news industry.

“If information is not reliable and verifiable, it is at best useless and at worst dangerous,” Waddell, a news veteran of 50 years, told the Heritage committee Thursday.

At the other end of the news delivery universe, the committee also heard from two representatives of Facebook Canada, who assured the MPs that the global social media platform — with 22 million Canadian accounts — “takes very seriously helping people gather information.”

The committee has been holding hearings since February on how the news industry is serving local communities. The study was prompted by successive rounds of cost-cutting — or outright closures — at media organizations due to the collapse of traditional advertising revenues.

Since 2011, 20 out of 122 daily newspapers in Canada have closed, while traditional giants including the Toronto Star, the Globe and Mail, and the Postmedia chain have shed scores of editorial staff across the country.

The common theme from the testimony? That the dramatic downsizing has been unhealthy for local communities and for the larger democratic vitality of the country, especially as questions swirl about the effects of fake and flimsy news during the U.S. election campaign.

“If we are not serious about facts and what’s true and what’s not, and particularly in an age of social media where so many people are getting their information in sound bites and snippets off their phones, if we can’t discriminate between serious arguments and propaganda, then we have problems,” said Obama.

But the difficulty in finding solutions was illustrated during two days of hearings this week.

Representatives of massively profitable platforms Google and Facebook — which have become conduits for Canadians reading news online — testified to the same committee that was hearing from tiny holdouts like Waddell of Neepawa and the Nunavut-based Northern News Services Ltd.

“We believe that Google and publishers share a common cause,” Richard Gingras, Google’s vice-president of news, told the committee earlier this week via video conference.

“We both value and depend on an open platform for free expression and knowledge. We both want to connect people to information.”

Gingras boasted that Google News links to more than 75,000 sources globally, and some 2,000 Canadian sources, a third of which are French language. None of the MPs on the committee asked him to break down his Canadian figures.

Kevin Chan of Facebook Canada was similarly bullish during testimony Thursday, noting there are 1.8 billion people on Facebook globally and that means 1.8 billion “unique news feeds.”

As Liberal MP and former broadcaster Seamus O’Regan dryly observed: “all roads lead to back to Facebook and Google.”

None of that addresses the issue of gumshoe reporting, especially in smaller communities.

Committee chair Hedy Fry raised the issue of fake news stories being promoted on Facebook as an example of the accountability issue that Waddell highlighted.

Facebook founder Mark Zuckerberg posted a message last week asserting that the issue of fake or misleading news was being overblown, but remained a concern.

“Of all the content on Facebook, more than 99 per cent of what people see is authentic,” Zuckerberg wrote. “Only a very small amount is fake news and hoaxes.”

But research by BuzzFeed has found that many of the most-shared political news stories on Facebook in the last weeks of the U.S. presidential campaign were complete fabrications, often with a partisan slant.

“All of those other platforms have a duty to be verifiable and accountable,” Fry told the Facebook representatives, before referencing the U.S. presidential election outcome and the United Kingdom’s vote earlier this year to leave the European Union.

“People believe what they read,” she said. “And how can a democracy be well served when the information isn’t verifiable?”