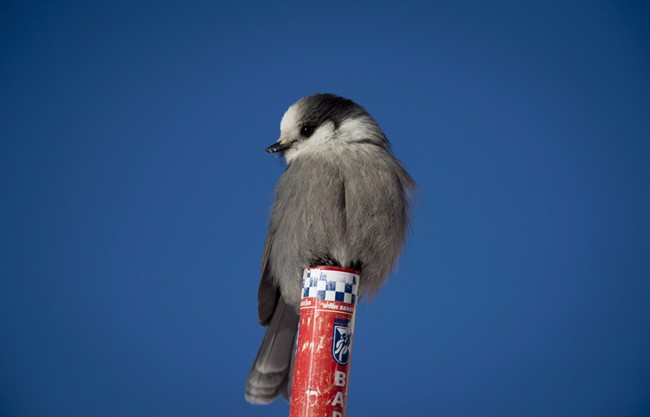 A whiskey jack sits on a post in Lake Louise, Alta., Saturday, Dec. 7, 2013. A two-year-long, Canada-wide search has resulted in the gray jay, also known as the whiskey jack, being chosen as Canada’s national bird by the Royal Canadian Geographic Society. (THE CANADIAN PRESS/Jonathan Hayward)

OTTAWA – A two-year-long, Canada-wide search has resulted in the gray jay — also known as the whiskey jack — being chosen as Canada’s national bird by the Royal Canadian Geographic Society.

The robin-sized gray jay, which is found in every province and territory but only in Canada, is being lauded by the society as a reflection of Canadians’ best qualities — smart, tough and friendly.

The whiskey jack’s common name doesn’t come from booze, but from the original Cree and Algonquin languages in which it was celebrated as a friendly and clever herald of good fortune.

The gray jay beat out higher profile contenders including the common loon, snowy owl and black-capped chickadee in a contest that garnered national attention and attracted almost 50,000 online voters.

The gray jay actually came third in voting behind the loon and the snowy owl, but was chosen following a public debate and deliberations by a panel of experts.

The federal government has not committed to naming a national bird — let alone the gray jay — but the Canadian Geographic Society argues that Canada’s 150th anniverary in the coming year offers a perfect opportunity.

The society announced its preferred candidate Wednesday evening at its annual dinner at the National War Museum in Ottawa.

David Bird, a professor emeritus from Montreal’s McGill University and one of the country’s foremost ornithologists, called the gray jay “the perfect bird for Canada.”

“They’re the smartest birds on the planet. That’s actually been shown scientifically,” Bird said in an interview.

The jays never migrate out of Canada, wintering in the boreal forest where they nest. They’ve been observed sitting on eggs in temperatures as low as minus 30 C.

“These birds will also come down to your hand, without being prodded or trained in any way, because they’re very friendly,” said the ornithologist, who now lives on Vancouver Island.

“So now you’ve got friendly, hardy and intelligent — that, to me, epitomizes the average Canadian.”

Gray jays are found in the boreal forest in every province and territory, coast to coast, and are only rarely observed anywhere south of Canada’s border.

In addition to their Cree name — wisakedjak — they were known as Canada jays for the better part of two centuries until 1957, when the American Ornithologists’ Union renamed the cousin of crows and ravens as gray jays.