New Broadway Art Sculpture, ‘Heaven Between,’ to Be Lit 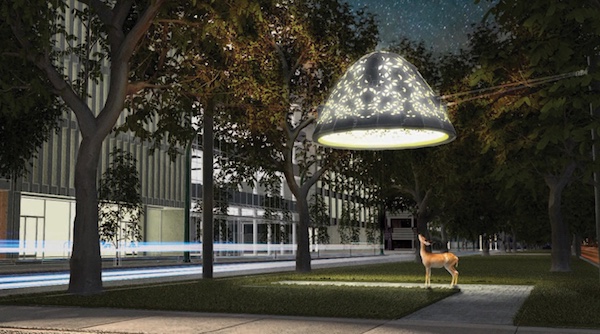 ‘Heaven Between’ is a sculpture created by artist Bill Pechet. Its public lighting will happen Monday evening at Broadway and Edmonton Street. (WINNIPEG ARTS COUNCIL)

The sculpture, titled Heaven Between, has been turning heads since it recently went up on the median at the corner of Broadway and Edmonton Street.

The permanent light-based art piece is part of the city’s public art collection and was created through the Winnipeg Arts Council’s Public Art Program.

According to Vancouver-based Pechet, the dome shape of the new piece was inspired by the rooftops of significant buildings on the boulevard. Framed by the domes of the Manitoba Legislative Building at one end of Broadway, and Union Station at the other, the artwork is patterned with cut out silhouettes of elm leaves.

This intricate design casts light on the ground while reflecting the trees that line the street, planted over one hundred years ago by visionary city-makers.

“I know Winnipeggers will be delighted by this stunning artwork that reflects the history of this grand boulevard while adding more beauty to our public spaces,” said Carol A. Phillips, executive director of the Winnipeg Arts Council.

A public lighting ceremony at the hands of Mayor Brian Bowman is planned for Monday at 5:30 p.m. A reception will immediately follow at Fools & Horses Coffee, 379 Broadway, at 6 p.m.

← Previous: Right in the Centre -- News Must Be Reliable, Verifiable Next: Kleefeld Man Killed in Head-On Crash East of Winnipeg →
Tags: Winnipeg