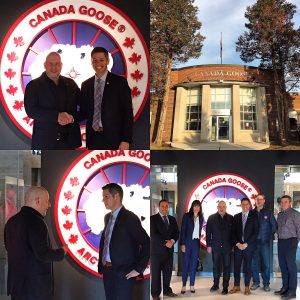 Bowman made the post on Monday with the caption: “Pleased to meet w/ Dani Reiss (President & CEO) of @canadagoose re #Winnipeg operations and our growing connections to the Canadian North.”

The winter wear manufacturer opened up a second factory in Winnipeg last November. The company also operates a factory on Bannatyne Avenue in the Exchange District.

“They kill coyotes to make those jackets,” one commenter wrote on Bowman’s post.

“These jackets are filled with torchured [sic] and murdered animals. That’s what you are paying for,” said another.

“It’s the worst overpriced jacket with the most animal cruelty! Mr. Bowman, If you really want to know about them, you should learn how they get the fur!,” another person said.

“This is disgusting. Animals are tortured for the sake of these jackets,” another reads.

In responding to a deluge of social media criticism over how it sources the fur for its products, Canada Goose often sends customers to this page on their website, explaining their position.

“We understand and respect that some people think animal products should never be used in any consumer products, however we do not share that view,” the company says.

Canada Goose has long been lauded for creating hundreds of local jobs and investing in Manitoba’s economy as opposed to outsourcing its operations.

Pleased to meet w/ Dani Reiss (President & CEO) of @canadagoose re #Winnipeg operations and our growing connections to the Canadian North.