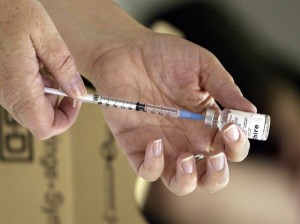 A nurse loads a syringe with flu vaccine for injection at the Victoria Clipper Terminal in Victoria Saturday, Oct. 23, 2004. (THE CANADIAN PRESS/Chuck Stoody)

About 30 nurses employed at the Nisichawayasihk Personal Care Home in Helson House, Manitoba are now on strike.

Talks between the Local 367 members and their employer failed to meet the request of the bargaining committee.

The nurses’ union says members are being paid 27 percent less than others who do the same work in other areas of Manitoba.

“For example, health care aides in Thompson, and throughout the province, make $4.00 more per hour than these members, but they all have the same level of training. How does that make sense?” questioned MGEU president Michelle Gawronsky.

“They, along with other workers at this facility, provide around the clock care to elders in their community and we are asking that they be paid fairly for the important care they deliver.”

Nurses at the same personal care home went on strike last year over a similar wage parity issue and were successful in receiving equal pay.