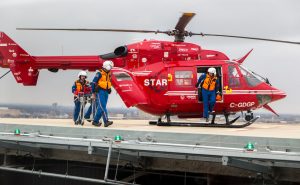 STARS air ambulance lands on the new heliport at HSC Winnipeg during a test flight on Friday, November 25, 2016. (WRHA / HANDOUT)

Patients needing to be airlifted from other parts of Manitoba and flown to Winnipeg for urgent care can now receive faster treatment. Prior to the HSC heliport, STARS air ambulance had to land at the airport or near a City of Winnipeg industrial area off of Nairn Avenue and then taken by ground ambulance to hospital.

“With this site open, it will be easier and faster for Manitobans to get the emergency care they need,” said Health Minister Kelvin Goertzen.

The heliport sits atop the new, 91,000-square-foot Diagnostic Centre of Excellence, located between pediatric inpatient units of HSC Children’s Hospital and the Ann Thomas Building.

Test flights were performed last Friday, so that STARS air medical crews and pilots could familiarize themselves with the new location. Patient transport can begin immediately.

“Manitobans living and working in rural or remote areas in need of life-saving care will benefit from expedited helicopter air ambulance transport times into and out of the roof-top heliport,” said Betty Lou Rock, vice-president of operations, Manitoba, for STARS.

“STARS is pleased to be a partner in the process.”

“It takes a team…” to provide life-saving services: Betty-Lou Rock & Helen Clark, @STARSambulance and WRHA together with @hscwinnipeg. pic.twitter.com/j3LnnfJqWq