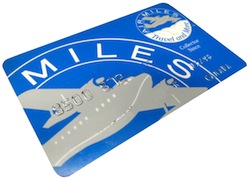 TORONTO – Following an uproar from consumers, the company that runs the Air Miles loyalty points program says it is cancelling plans that would have seen collectors lose any miles not used within five years.

But the change of heart swiftly angered some who had scrambled to redeem their miles before the expiration policy was to take effect Dec. 31.

LoyaltyOne announced Thursday it was walking away from the policy, effective immediately, citing an uncertain legislative environment throughout the country.

“There is uncertainty with provincial governments proposing or considering legislation across Canada, so we have decided to cancel the expiry policy so that all collectors, regardless of location, can be confident that their balances will be protected,” LoyaltyOne CEO Bryan Pearson said in a statement.

“Our commitment is to create an environment where reward programs continue to deliver value to consumers and the companies that operate them.”

In Ontario, there was a private member’s bill before the provincial legislature that sought to make it illegal for companies to allow points to expire strictly due to the passage of time.

LoyaltyOne said it believes cancelling the expiration policy will lead to governments and industry members having more meaningful conversations that can help such loyalty programs remain viable across Canada.

Some Air Miles collectors welcomed the news that they wouldn’t be losing their rewards.

Others, however, quickly expressed disappointment, saying they wouldn’t have claimed their miles if they had known Air Miles was going to pull an about-face.

Patrick Arsenault, a Canadian studying at the University of Missouri in Columbia, said he started acquiring Air Miles in 2004 and had about 7,000 miles he needed to claim before the end of the year.

“The goal was always to be able to buy a trip at the end of my studies or buy something,” said Arsenault, who graduates in May.

Faced with the looming expiration, he said he claimed miles to pay for his parents and brother to fly from Montreal to visit him this holiday season. They had been planning to drive to see him, he said.

The three tickets cost him nearly all his points and about $450 in additional fees, he said.

“I could have used my points to treat myself when I graduate in May, but now I have barely any points left.”

LoyaltyOne did not make anyone immediately available for comment.

The Air Miles reward program launched in 1992 and has more than 11 million active collector accounts.