Winnipeg Braces for First Major Snowfall of the Season 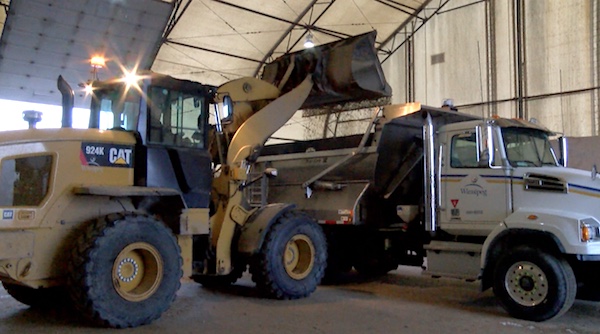 A sanding truck is filled up at the City of Winnipeg’s Public Works yard on Monday, December 5, 2016. The first major snowstorm of the season is expected to arrive this evening. (CHRISD.CA) 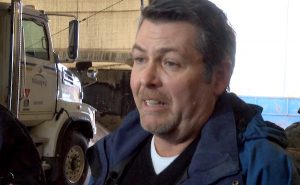 The City of Winnipeg’s arsenal of snow-fighting equipment is standing by to deal with potentially 15 to 30 cm of snow over the next few days.

A winter storm warning remains in effect for Winnipeg and much of southern Manitoba.

“We have our crews ready to sand the streets as required. Once the snow starts to accumulate, we’ll be deploying truck plows onto the streets,” Allen said. “Crews have been and are continuing  to work winter shifts around the clock, so we’re ready to tackle anything that comes our way.”

The city is utilizing up to 450 pieces of equipment depending on the accumulation received. Bus routes and collector streets will be targeted for plowing first. A determination will be made later in the week to see if residential streets will also require plowing.

“We’re going to get into winter in a very big way,” Allen emphasized. “It’s very important for motorists and pedestrians to adjust their behaviours for winter. That means when the snow starts to accumulate, that means slowing down and allowing additional travel time to arrive at your destinations.”

Winnipeg has about $10 million left in its 2016 snow-clearing budget. Allen says this week’s operations are expected to cost the city anywhere from up to $6 million.

The annual snow route parking ban went into effect last week and lasts until March 1, 2017, meaning motorists are not permitted to park on any street designated as a snow route daily between 2 a.m. and 7 a.m.

To check your snow zone, visit knowyourzone.winnipeg.ca or download the Know Your Zone from the App Store or Google Play. As of Monday, the app had received 6,200 downloads.