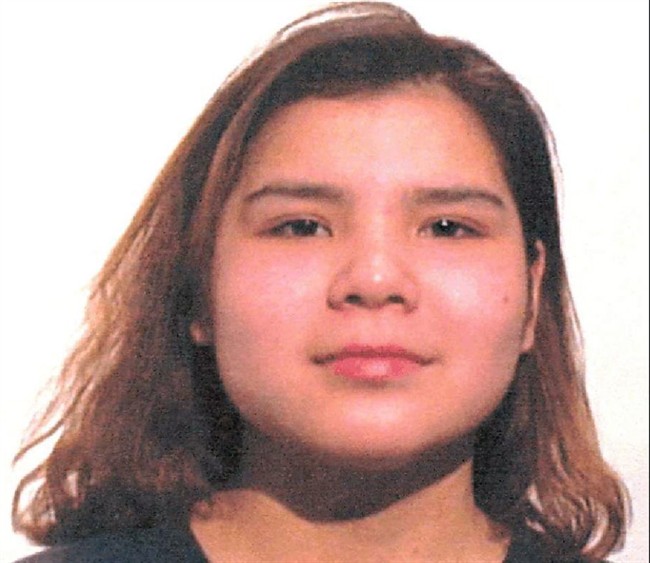 Tania Marsden is shown in a Manitoba RCMP handout photo. Winnipeg police are asking for members of the public to help solve the killing of an indigenous teen 18 years ago. Tania Marsden was last seen celebrating her 18th birthday at a Winnipeg hotel in September, 1998. (RCMP HANDOUT)

WINNIPEG – Winnipeg police are asking for members of the public to help solve the killing of an indigenous teen 18 years ago.

Tania Marsden was last seen celebrating her 18th birthday at a Winnipeg hotel in September 1998. Her body was found weighed down with a cement block in the Assiniboine River several weeks later.

Sgt. Shawn Pike said officers recently executed a search warrant last month and are now looking for five people who may have information about her death.

They released composite sketches of three men and two women Tuesday, along with a picture of the car they are focusing on.

Marsden’s family has been looking for closure for 18 years and they deserve some answers, Pike said.

“I appreciate that we’re talking 18 years ago now but people that do have information out there,” Pike said Tuesday. “We ask them to take the time, find the courage, think of the family that’s out there and reach out to us.”

Investigators with Project Devote have been probing Marsden’s death since they formed in 2009, he said. The task force is now examining 30 cases.

“They’re challenging investigations. They’re definitely some of the most complex and challenging homicides that I’ve ever seen in my career,” Pike said. “This is not a fast process by any stretch of the imagination.”

Pike said the people of interest in Marsden’s case could be anywhere in Canada.

“We’re asking for any bit of information we can get, no matter how small someone may think it is,” he said. “Give us an opportunity to follow it up and see where we go from there.”