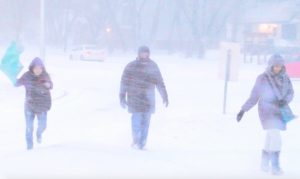 Commuters make their way to a bus stop in south Winnipeg on Tuesday, December 6, 2016. (CHRISD.CA)

After a relatively warm and dry fall, the Prairies are receiving a dose of what the first week in December should normally look like.

About 15-30 cm of snow is expected to fall on the city and southern Manitoba over the next two days, not easing up until late Wednesday and possibly into Thursday with some lingering flurries.

The City of Winnipeg is clearing roadways and sanding streets to improve traction. Sidewalks on main routes and active transportation paths adjacent to main routes are also being cleared. Starting Wednesday at 7 a.m., plowing of back lanes will begin and will continue until completed. All snow disposal sites will open tonight at 7 p.m.

A winter storm watch on Sunday was upgraded to a winter storm warning early Monday, prompting city officials to lay out its snow-clearing plan. Sanding trucks and plows have already hit the streets to open up main routes for Winnipeggers. Depending on the significance of the cleanup, it could cost the city up to $6 million by the time the last snowflake falls.

Brandon and the Westman region received precipitation moving in from Saskatchewan on Monday, covering the streets of the Wheat City in a heavy, sticky layer of snow. Winnipeg is receiving the remnants of that system paired with a low moving up north from the U.S.

Once the snow begins to fall, a cold front will move in on Thursday, pushing the overnight low in the city down to -21°C.