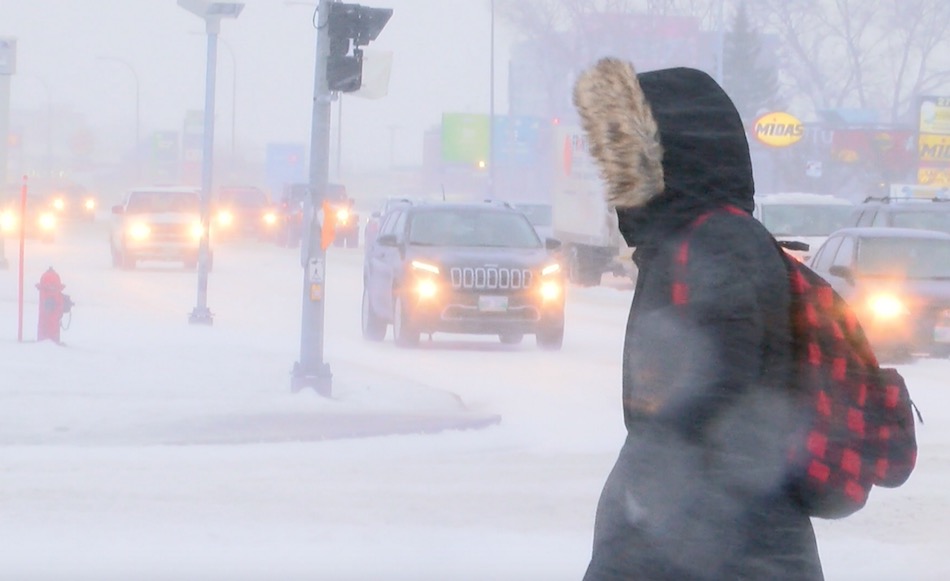 A person waits for a bus in blustery conditions in Winnipeg on Tuesday, December 6, 2016. (CHRISD.CA)

Freezing temperatures and poor weather conditions that have hit the Prairies in recent days are believed to have contributed to a woman’s death and caused school closures and service delays.

Paramedics say a woman in her 80s was trapped for at least an hour outside a home near Didsbury in central Alberta on Monday.

She had tripped getting out of her vehicle and her leg became pinned so she couldn’t get up.

She was found by a family member, but died in a Calgary hospital.

Temperatures across much of Alberta and Saskatchewan have been near -20 C with wind chill making it feel much colder.

Southern Manitoba, meanwhile, has been hit hard by a snowstorm that forced more than a dozen school divisions to close and made busing difficult in others.

The Winnipeg School Division said Tuesday that the snow was making it hard to manage side streets for dismissal drop-offs.

“Schools are contacting families of bused children to inform parents that buses will attempt to drop off children at their normal … sites,” the division said in a release.

“If buses are unable to navigate the streets, students will be returned to their home school where they will be supervised until parents can pick them up.”

Snow also closed the Trans-Canada Highway from the Saskatchewan-Manitoba boundary to just west of Winnipeg.

Environment Canada issued storm warnings across southern Manitoba and predicted a low-pressure system could dump up to 30 centimetres of snow in some areas.

The agency warned of poor driving conditions and near-zero visibility at times, especially in the Red River Valley of southwestern Manitoba.

Bitterly cold arctic air is expected to sweep in behind the system. Lows are predicted to hit -20 C by the end of the week accompanied by wind-chill values in the -30 C to -35 C range.

Drivers are being urged to consider postponing non-essential travel until conditions improve.