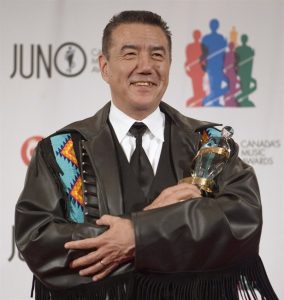 The Humanitarian Award recipient Tom Jackson poses with his award at the Juno Awards gala dinner in Saskatoon, Sask. Saturday, March 31, 2007. Travellers stranded by a blizzard in a Manitoba town got a treat on Tuesday night when Jackson put on an impromptu concert in the storm shelter. (THE CANADIAN PRESS/Adrian Wyld)

VIRDEN, Man. – Travellers stranded by a blizzard in a Manitoba town got a treat on Tuesday night when singer Tom Jackson put on an impromptu concert in the storm shelter.

A dump of snow and howling wind shut down the Trans-Canada highway at the Manitoba-Saskatchewan boundary, which forced people to hunker down in the town of Virden. Jackson and his Huron Carole musical group were travelling from Regina to Brandon, Man., and were among those stranded.

The Huron Carole is a touring musical production which raises donations for food banks.

Virden Mayor Jeff McConnell said people were excited to hear that Jackson — best known as an actor on the TV show “North of 60” — was in the community. Word spread quickly that the founder of the Huron Carole concerts was going to appear at the local emergency shelter and was inviting musicians to join him.

With area hotels fully booked, about 60 people were staying in the shelter.

McConnell said Brandon’s loss was Virden’s gain. About 200 people braved the snow to hear Jackson and his group.

“Understand that, in order to get there, they’re driving through some fairly significant drifting,” he said. “Small cars should not be travelling on our streets in town.”

The evening concert ended with Jackson leading the crowd in a rendition of “Silent Night” as he shook hands with members of the audience.

McConnell said people are grateful to Jackson and his group for lifting spirits while they waited out the snow.

“We cannot thank them enough for offering their talents,” he said. “I have to say, it’s probably part of the reason why a number of the people who are staying in our facility without really wanting to are not complaining.”

The Trans-Canada was closed again Wednesday from Portage la Prairie to the Saskatchewan boundary. Storm warnings were replaced with blowing snow advisories in Manitoba and more snow expected.

— By Chinta Puxley in Edmonton