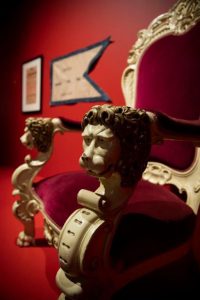 WINNIPEG — The latest exhibit at the Canadian Museum for Human Rights reveals the struggle for democracy and responsible government in the 30-year period before Canada became a nation.

1867: Rebellion & Confederation highlights a range of human rights issues that arose during this period, including abuse of state power, threats to personal liberty and freedom of the press, and challenges to linguistic, religious and voting rights. It also examines how Indigenous peoples were excluded from the still-unfinished process of Confederation, which for them marked a new period of dispossession and loss.

The exhibition, located in the museum’s Level 1 Gallery, was originally developed by the Canadian Museum of History (CMH) in Gatineau, Quebec and was adapted by the CMHR.

Objects include cobblestones thrown at the Governor General, weapons used in rebellions, U.S. civil war weapons and uniform, a silver tea service owned by Canada’s first prime minister, and artifacts on loan from the Manitoba Museum (a bead-and-quill Métis saddle and a sword used by Métis leader Cuthbert Grant).

In a separate announcement Thursday, the CMHR received a $25,000 donation from The Co-operators. The funding will support the Empowering Women: Artisan Cooperatives that Transform Communities exhibit, which is currently on display, as well as youth engagement and the museum’s Level 1 Gallery.