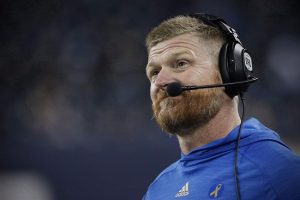 The CFL team announced Friday that both men signed three-year deals, with O’Shea staying on the sidelines through 2019 and Walters adding to his one remaining year to keep him at the helm through 2020.

Club president and CEO Wade Miller said at a press conference that he and Walters talked about an extension during the season.

“(We) had a handshake and figured it out at the end of the year,” Miller said.

Walters and O’Shea got their talks going at a Winnipeg pub after returning from the Grey Cup in Toronto.

“We had a little bite to eat, had a couple of beers and got the ball rolling,” Walters, 43, said. “We made our notes and then we fine-tuned it over the next week and brought Wade into the picture to kind of keep him up to speed.”

Walters easily rattled off the reasons why he thought his friend O’Shea had the tools to guide the club to a Grey Cup title that’s now eluded Winnipeg for 26 seasons.

“The players respect him. The players play for him. He’s a leader in this locker-room,” Walters said.

The Blue Bombers went 7-11 in O’Shea’s first season, while last year it was 5-13 after then-starting quarterback Drew Willy suffered a season-ending injury in August.

But the Bombers posted an 11-7 record this year, the first time they’ve had that many wins since 2003. Winnipeg also reached the playoffs for the first time since 2011, although it ended with a 32-31 loss to the B.C. Lions in the West Division semifinal.

O’Shea, 46, said the new deal keeps him where he wants to be.

“I don’t know that there’s many people in this role in whatever league that want to leave something half finished,” he said. “I just don’t believe that. I don’t know that it’s anything unique.

“We’ve started to build something here. I think we’re all leaving our fingerprints on it and the players are, too. We want to turn it into something great.”

O’Shea’s next task, after he celebrates his new contract by taking his family out to dinner, is talking to his assistant coaches about their futures.

Offensive co-ordinator Paul LaPolice has another year left on his contract, while most of the others have option years and a few expire at the end of January.

Walters will focus on the team’s approximate 20 pending free agents. The most important one is starting quarterback Matt Nichols, who was acquired in a September 2015 trade with Edmonton.

Nichols took over Willy’s starting job in late July when the team was 1-4 and led them to a seven-game win streak. He finished with a career-high 3,666 yards, 18 touchdowns and nine interceptions. Willy was traded to the Argonauts in September for CFL all-star defensive back T.J. Heath.

Walters said he’s talked to Nichols’ agent about salary numbers and is “cautiously optimistic” a deal will get done.