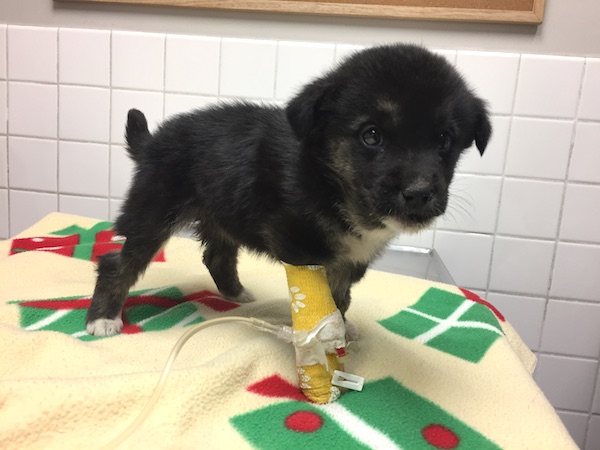 A five-week-old puppy is recovering at a Winnipeg veterinary hospital after being found nearly frozen to death in a northern Manitoba community.

Manitoba Underdogs Rescue found Demi, a husky-shepherd mix, on Sunday afternoon while feeding and picking up stray animals nearby.

Executive director Jessica Hansen thought the dog was going to pass away in the arms of volunteers on the three-hour drive back to Winnipeg.

“She was nearly dead. We snuggled her into the chest of one of our volunteers, wrapped her in heat packs, and put some corn syrup on her gums to try and increase her energy levels,” Hansen said. “She was just so tiny and helpless. It broke our hearts.”

Demi has tested negative for the deadly Parvovirus, but the Underdogs team expects her treatment to be expensive. She is currently resting in an incubator at the Winnipeg Animal Emergency Hospital.

“We brought two other dogs into our care on our trip yesterday, and five more for other local rescues, but there are more out there in need of homes.”

Anyone wishing to make a donation can do so by visiting ManitobaUnderdogs.org.