Lace ‘Em Up: The Forks Canopy Rink is Open 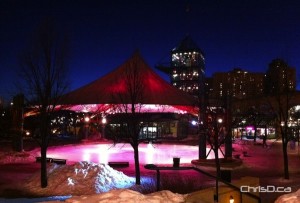 The rule of thumb every year is once you can see your breath, the opening of the canopy skating rink at The Forks isn’t far off.

The ice is frozen and freshly-flooded downtown and the skate rental kiosk is also open for business.

“We’re embracing winter here at The Forks,” said Paul Jordan, CEO of The Forks. “With the first rink open and the opening of Arctic Glacier Winter Park just around the corner, we’re excited to get out there.”

On-land skating trails are expected to be open later this week, followed by more pieces of Arctic Glacier Winter Park in the next couple weeks: the toboggan run, an ever expanding snowboard facility professionally designed to thrill, and the Snowman Lounge.

Those without skates can rent some from Iceland Skate Rentals for $5 (adults) and $3 (kid and seniors). Skate sharpening is also available for $5.

The river ice still isn’t thick enough to skate, so officials are warning the public to remain safe on land, for now. Future updates on winter activities can be found at TheForks.com or following @TheForks on Twitter.