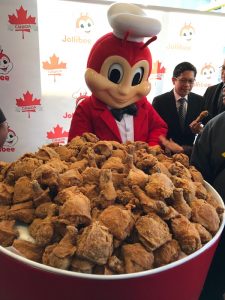 WINNIPEG — The lineup is expected to be around the block all in the name of “crispylicious” and “juicylicious” fried chicken.

Jollibee, known as the “McDonald’s of the Philippines,” will open its first Canadian store in the city on Thursday.

The local Filipino community — the third-largest in Canada — has been buzzing for months over rumours of a planned Jollibee location. Social media exploded earlier this year when news of the arrival was confirmed by the organizaton.

The Winnipeg opening marks the company’s 35th store in North America. A second location is planned for McPhillips Street in 2017 (Northgate) with future expansions in Scarborough, Mississauga, and Edmonton in 2018. Globally, Jollibee operates in 12 markets with a total of 3,236 stores.

“Winnipeg is a fitting choice for Jollibee’s first Canadian store because it has largest density of Filipinos to the total population of the city,” said Maribeth dela Cruz, vice-president and general manager for Jollibee Foods Corporation North America.

“Every Filipino wants to be reminded of the taste of home, especially during Christmas, and I think there is no other fast food brand out there that can deliver that but Jollibee.”

Aside from its signature Jolly Crispy Chicken, the chain is also known for its mouth-watering sweet-style spaghetti and peach mango pie.