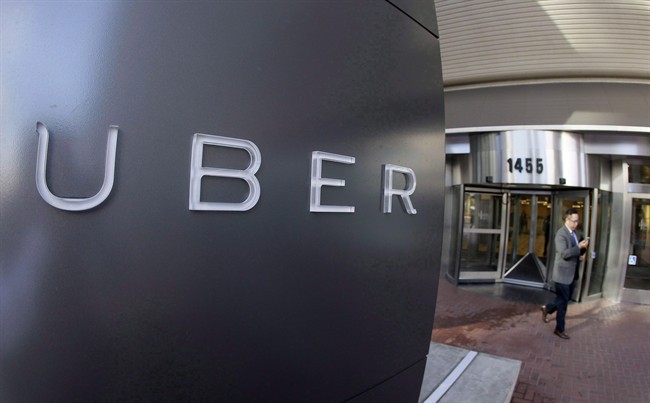 A man leaves the headquarters of Uber in San Francisco on Dec. 16, 2014. (THE CANADIAN PRESS/AP, Eric Risberg)

WINNIPEG — A new report commissioned by the Manitoba Taxicab Board is recommending Uber be allowed to operate in Winnipeg.

An independent review of the taxi industry was launched in December 2015 by MNP under the direction of the former NDP government to consult the public and stakeholders on the future of the industry.

“The introduction of transportation network companies (TNCs), often called ‘ride-sharing’, has been a significant disruptor in this industry on a global basis. Uber is the most well-known of these companies,” the report states.

Uber works as a mobile ride-sharing app linked to a credit card to commission a ride from a driver using their private vehicle. The transaction is completely cashless and riders and drivers can “rate” each other on a five-star scale.

The San Francisco-based company was valued at $68 billion in 2015.

“The Taxicab Board is pleased with the in-depth analysis and broad-based consultation process that MNP undertook to produce this comprehensive report,” said Randy Williams, chairperson of the Taxicab Board.

The report states local taxicab companies have responded to Uber by launching their own mobile apps, but they “generally have not reached the same level of sophistication as the leading TNC, Uber.”

The taxi industry has been loudly opposed to Uber, holding rallies and protests in other cities which have sometimes boiled over and turned violent.

More than 10,000 responses to the review’s online and telephone surveys were received resulting in 40 recommendations for modernizing and streaming the regulatory framework governing the taxicab service in Winnipeg.

Williams says the Taxicab Board will begin a review of those recommendations and allow the public to provide further feedback.