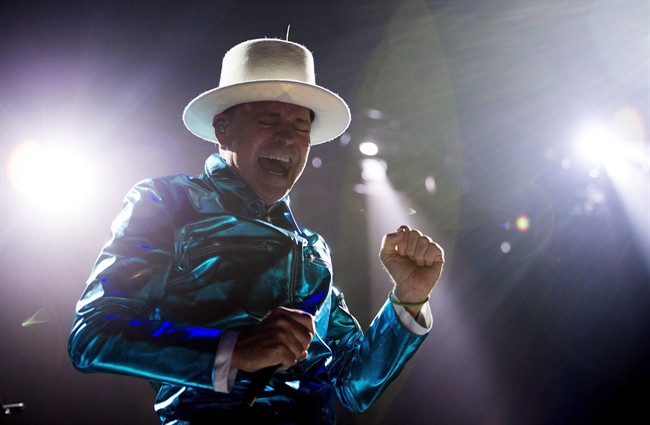 Frontman of the Tragically Hip, Gord Downie, leads the band through a concert in Vancouver, Sunday, July, 24, 2016. (THE CANADIAN PRESS/Jonathan Hayward)

Whether he was packing arenas for the Tragically Hip’s summer tour or igniting a renewed dialogue on reconciliation with aboriginals, the poetic singer-songwriter’s relentless energy offered hope in the starkest of circumstances.

His widespread impact on Canadian culture inspired news editors and directors across the country to name him the Canadian Press Newsmaker of the Year.

Downie received 26 votes (39 per cent) in the annual survey, marking the first time in the Newsmaker’s 70-year history that an entertainer has been selected for the title.

It was Downie’s public struggle with mortality that seemed to connect most deeply with voters.

His stage performance, captured vividly during the Hip’s televised final tour stop in Kingston, Ont., was a celebration of life juxtaposed against the looming promise of death.

“The outpouring of support and grief for Downie was unprecedented, and the kind of shared cultural experience that doesn’t happen often,” wrote Treena Wood, program director at CKWX News 1130 in Vancouver.

“Everyone will remember where they were when they watched that final concert.”

Formed in 1984, the Hip spent decades travelling the country’s highways and working their way up from playing dive bars to filling arenas. Their perseverance earned a loyal fan base, particularly with working-class Canadians, who made anthems out of the band’s biggest hits like “Ahead by a Century” and “Bobcaygeon.”

When Downie’s health condition was revealed in May — only a few weeks after the Fort McMurray wildfires left many Canadians heartbroken — it felt like another kick in the gut for the nation.

“He represents all those dealing with carnage in their lives,” said Dori Modney, news director at CHLB and CJBZ Radio in Lethbridge, Alta.

“Whether it’s the wildfire or the downturn in the economy, many people have soldiered on, in spite of their world crashing around them.”

Downie’s situation was unique in that he was still healthy enough to perform. That gave him an opportunity to shape his own final act.

When the Hip’s managers sat alongside Downie’s neuro-oncologist Dr. James Perry at a press conference in May — absent the band — it became clear that Downie had a plan. Despite battling glioblastoma, an incurable and rare form of cancer, the 52-year-old father of four was going to stick with the long-standing adage of the entertainment industry: The show must go on.

“His head space is, ‘We want to blow people’s minds,'” said Patrick Sambrook in relaying Downie’s desire to tour one last time.

The “Man Machine Poem” tour became Canada’s hottest summer ticket. Fans jostled for seats but many were left disappointed when they sold out almost immediately. But the Hip struck an agreement with the CBC to air the band’s climactic final show in Kingston, their hometown. An estimated four million Canadians watched the broadcast and thousands more gathered across the country for public screenings.

Many of them, not even Hip fans necessarily, got swept up in Downie’s story as a cancer fighter who refused to surrender quietly.

At the show, an impassioned Downie led the band through a nearly three-hour set that included most of the Hip’s biggest songs. He also used the national platform to call for more attention to the inequities faced by indigenous people, particularly in the North. As he pointed out the prime minister, who sat in the audience wearing a Hip T-shirt, he sent a message.

“And what’s going on up there ain’t good.”

His words hinted where Downie would shift his energy next.

Less than a month later, the singer-songwriter lifted the veil on “Secret Path,” a solo multimedia project that recounts the life of 12-year-old Chanie Wenjack, who died in 1966 after running away from a residential school. Spread across a full-length album, a graphic novel and animated film, Downie’s interpretation of the child’s final hours brought a fresh urgency to a story many never heard.

“(It’s) an example of the importance of culture on having an impact on people.”

Earlier this month, an emotional Downie was recognized during the Assembly of First Nations special assembly in Gatineau, Que., and was anointed the “Man Who Walks Among the Stars.”

“It will take 150 years, or seven generations, to heal the wound of the residential school, to become a country that can truly call ourselves Canada,” Downie said after the tearful ceremony.

“We must walk down a path of reconciliation from now on. Together and forever.”

Since Downie went public with his diagnosis, more than $1 million has been raised for brain cancer research. He’s also motivated others to pitch into a fund that fosters relationships between indigenous and non-indigenous people.

Steve Wood of Northern Cree, who opened for the Hip at a Canada Day concert at London’s Trafalgar Square a few years ago, said he’s hopeful the singer’s efforts have created momentum.

“It doesn’t matter what colour you are, you could be the colour purple. You’re a human, and that’s what matters to him,” said the co-founder of the Grammy-nominated aboriginal group.